When I live off what I thought yesterday, I will start to be afraid

of those who copy me. 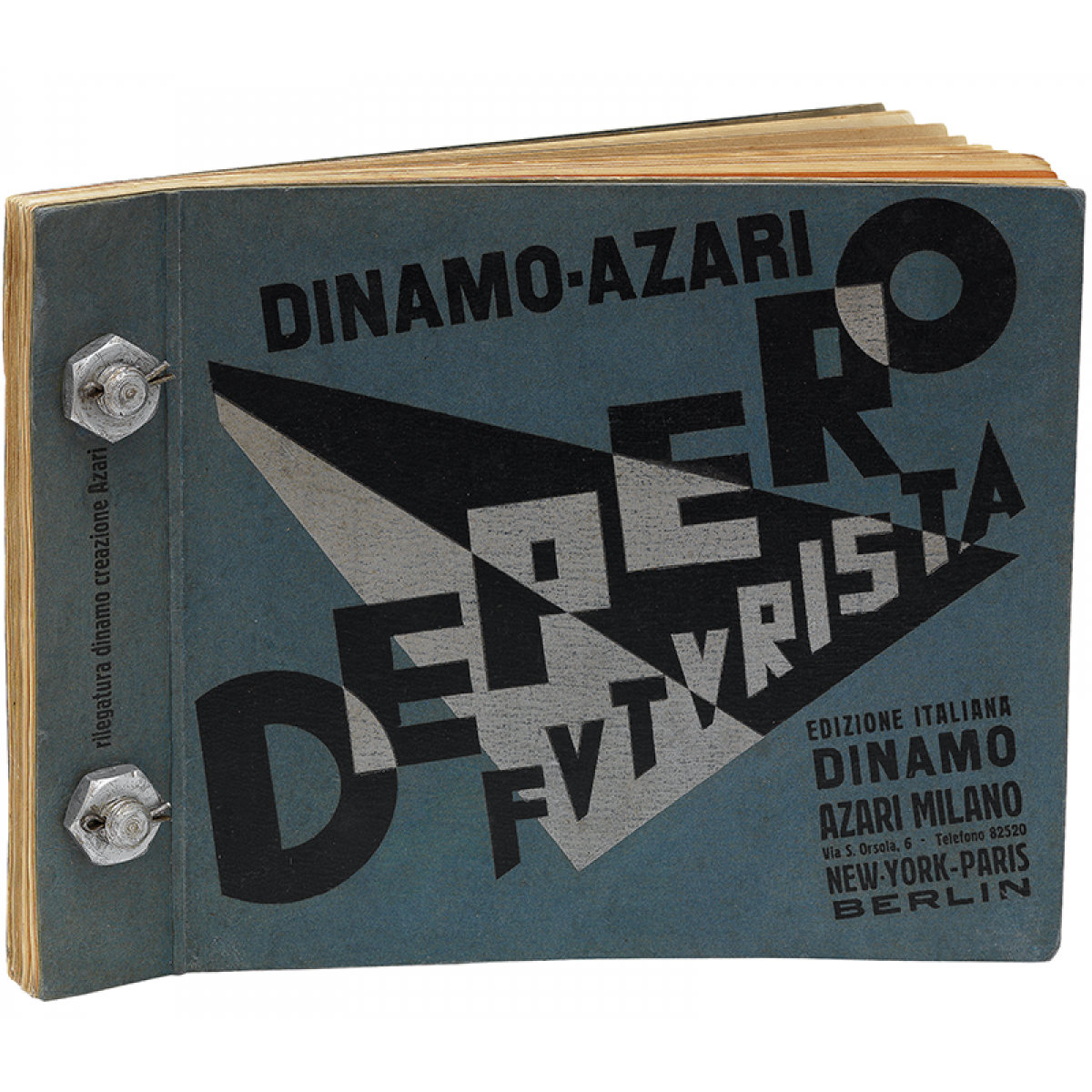 
Despite having co-signed with Giacomo Balla one of the most lucid manifestos of the entire historical avant-garde, despite having conceived what is perhaps the most surprising artist’s book published in the 1920s, despite his crucial theoretical and practical contributions to the art of graphic advertising, despite his extraordinary stage designs and theatrical costumes, his paintings and posters, his tapestries, his mannequins, his one-of-a-kind Futurist waistcoats, his delightful toys and his discovery of building typology, despite these and other valuable contributions to the most genuine avant-garde spirit, despite his central contribution to the myth of the robot in painting, theatre and dance, Fortunato Depero (Fondo, province of Trento, 1892 - Rovereto, 1960) is still merely regarded as one of the protagonists of Futurism’s second phase. Indeed, he is relatively valued in the Italian context, yet not considered an artist of truly European stature, much less of global standing. This lack of renown at the international level is puzzling when one considers the fact that he was the only Futurist of real importance who ventured to New York at the end of the 1920s, that legendary city in which, he thought, the future had already arrived. This is surely aided by the fact that, because of his age, he did not belong to the initial group of Futurists, the heroic Futurists of the first phase—Umberto Boccioni, Carlo Carrà, Luigi Russolo, Gino Severini, Giacomo Balla—but to that more obscure troupe of Futurism’s second generation, which, after Boccioni’s death, carried on the movement, broadening its creative range to include activities as yet unheard of for the avant-garde, such as fashion, furniture, advertising, toys, photography, utopian architecture, etc. This second Futurism was at times even more decisive than the first. However, it ultimately fell into historical disgrace because, among other reasons, many of its members aligned themselves with the ranks of Mussolini’s Fascism.

If we talk about avant-garde costumes, true aficionados will surely remember Depero’s Futuristic waistcoats, but they are unlikely to recall other works by the artist. If we mention artist books, everyone without exception will remember the so-called Libro imbullonato, but some will be unsure of its author. If we move into the even more specific sector of avant-garde toy exploration, specialists will invariably cite the Italian artist’s wooden rhinoceros and parrot figures, but they will probably not be able to cite works by the artist in other fields. This is part of the Depero effect: an artist present in the details, in his sweeping sectorial inventiveness, but nevertheless difficult to get a grasp on in an overarching sense. Depero shines in the details, but retreats into the shadows when we speak of the great artists of the last century. The fact of his wide-ranging interests has stymied a historical construction of him as an artist. But from the vantage point of the 21st century, where the avant-garde phenomenon is already a century removed, it should be possible to bring together the fragments of this discourse, which has so far been diffuse.

It is true that despite being one of the undisputed protagonists of Futurism’s second generation and in spite of all his valuable contributions to the movement, Fortunato Depero is still considered, to use a classic term from historiography, a «minor master». It is quite possible, if not entirely true, that this regard is due more to the dark times in which he lived and to his relative isolation in the province of Trent than to the real value of his work. And it is also possibly true that Depero was an artist who arrived too early, who opened the doors to new creative possibilities, only for them not to be taken up until decades later. But what is important is the fact that they were taken up, which makes him similar, if only in this respect, to Satie who, between melancholy and provocation, wrote on the base of a monument he imagined for himself: «I came into the world very young, in an age that was very old». Depero would be, then, a minor master, full of intuition, attentive to the slightest flap of the butterfly’s wings in the airs of creativity, whom time gradually gives his proper due. In neo-avant-garde Italian art, Bruno Munari is a figure of practically unanimous consensus, attentive to the formalization of the progetto, but without neglecting a poetics grounded in the fragility of everyday life. Munari, the artist who fine-tuned a veritable program of development-minded modernity for Italian art in the fifties and sixties, is a confessed debtor, although regrettably he did not confess it so often, of Fortunato Depero’s dark and provincial legacy.

Indeed, Depero was not only born in a remote province of what was still the Austro-Hungarian Empire, but he made it one of the alternative themes of his personalized Futurism. With a desire to be present for all the births of the longed-awaited future, he traveled to Milan, Rome, Paris and New York, yet he also nurtured a sensibility that, if not agrarian, was at least local in its wonder at what was close at hand. A similar dichotomy existed in his daily life, characterized simultaneously by patient, unhurried diligence and fervent imagination. Since his first exhibition at the age of nineteen in his native Rovereto, he was unrelenting in his commitment to and passion for art as well as in his commitment to Futurist ideology. Mercenaries and speculators aside, every artist is supposed to have a passion for art, down to the so-called second-rate artists and even the mediocre ones. Passion is like a starting point for engaging in an activity—or a craft—as specific as that of creation. This is even more so the case, if possible, for a young and inexperienced artist who wants to absorb everything from that passion that absorbs him. These lines that he wrote—still burning with emotion—in his notebook after repeatedly visiting the exhibition of drawings and sculptures by Umberto Boccioni at the Galleria Futurista di Sprovieri in Rome, testify to the passion of the young Depero:

All-white room - extremely simple layout - unframed drawings - white or colored plaster pieces on stands lined with gray paper - only the essentials. I observed, circling over each of the pieces - I scrutinized - I saw - I rose up on the tips of my toes - I bent down - I discovered everything new with lively interest - new encounters brought me to orgasm - they moved my whole nervous system - edges of bottles, of plates, of tables, decomposition of faces - memories of nervous hands, figures-ambience... Pure abstract art, musicality of lines - speed of masses-nightmare, of artists-reflection. Plastic representation of moods - desire to show the lyrical moment in the act of creation... (1)

At the age of 21 Depero suffered his petite morte; he fell ill with art and that ailment became chronic: he did not manage to cure himself for the rest of his life.