MAIL ART FROM TO FOR LATIN AMERICA.
PRISONS AND PIGEONS. 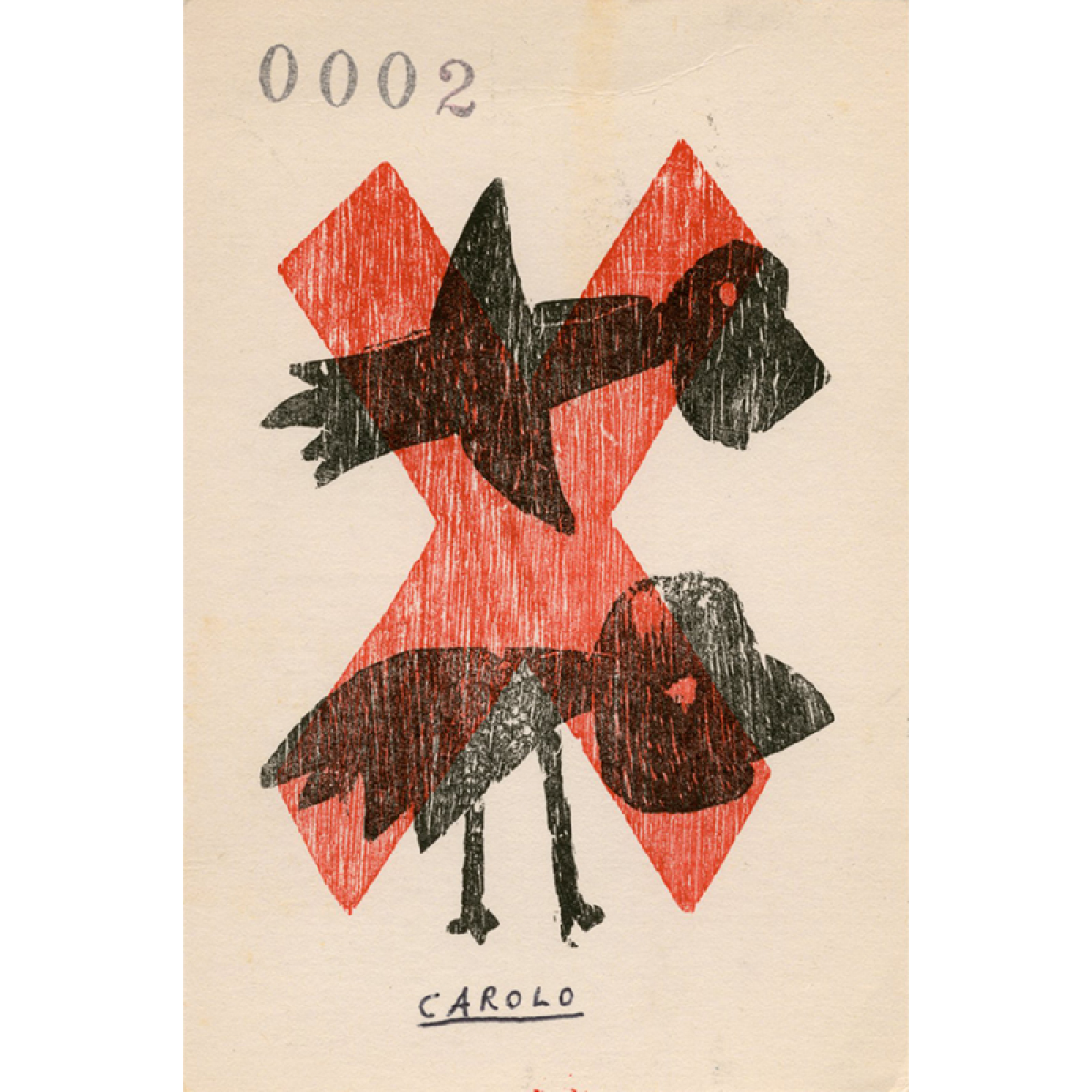 
«Today, art is a prison», Horacio Zabala declared in 1976. Set in black on white in three different languages, this statement is resounding. With no question mark, it does not pose a question, but rather gives a verdict. Nevertheless, it leaves room for other voices: the Argentinean artist invited responses to his sentence so as to collaborate on a collective book about the subject. That is how he began his Mail Art project: his proposal traveled through the postal system to 200 recipients belonging to his network of contacts (artists, designers, architects, historians and art critics), and received as many as 146 responses in the following months and years. With them, Zabala organized a series of exhibitions. The first of them consisted of the 37 contributions he had received up to that point and was held in the summer of 1977 at the Other Books and So (OBAS) space established by the Mexican writer Ulises Carrion in Amsterdam. In an explanatory note printed on the invitation, Zabala clarified that the show was only «a temporary interruption (a reflection upon) a continuing process». (1). He thus made it clear that, far from being its ultimate purpose, the exhibitions were only fleeting manifestations that, in point of fact, only interrupted the project’s course. The exhibition, event par excellence in the art world, is here almost an interference, a concession made, drama-free, to the prison system of art. 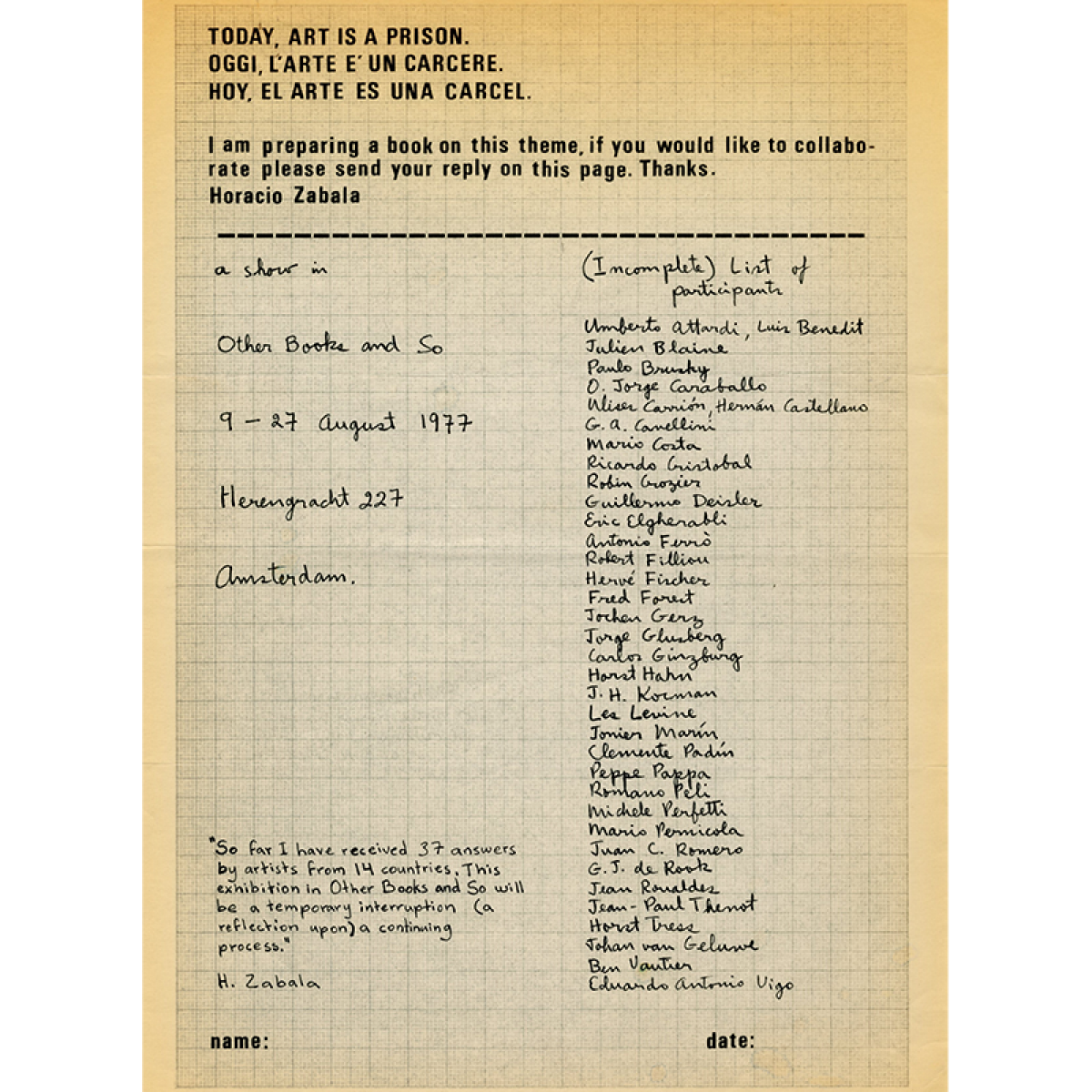 Invitation to the exhibition «Today, art is a prison» at OBAS, made on a copy of the announcement, 1977


«Today, art is a prison», Zabala stated, inviting his correspondents to write—with total freedom, of course—their thoughts on the matter between the bars of the graph paper of his letter. In this way, he was replicating the actions he denounced, leaving room for a kind of constrained freedom similar to that granted by «the art institution as an apparatus and bureaucratic framework» (2). His call for postal art thus functions as a signpost: by imitating the act of providing wings to fly in a cell, he exposes the existence of the bars. And the fact is that, without seeing them, it is not possible to break them. Analogously, the exhibitions of the responses received by Zabala are undisciplined uses of a normative practice: by constituting simple pauses in a process whose true aim is the journey itself, these pauses point to what lies outside them, to the life that inexorably passes by beyond their limits. Mail Art thereby becomes as a subterranean river that emerges from time to time on the surface of the official art world in order to cause its usual channels to overflow.

Mail Art as an alternative to the art system is obviously based on the use of the post as a medium. This means enabling pathways for art that are different from the commercial ones, making it possible to bypass the hierarchies imposed by the logic of profit and prestige that dominate the institutional channels of art. It also allows a kind of interpersonal and participatory communication that is in clear opposition to the unidirectionality of the mass media, whose fixed messages only admit a passive receiver. Moreover, in political situations of oppression and violence, such as the dictatorships that ravaged the Southern Cone of South America from the 1960s to the 1980s, Mail Art helped some simply to survive: to circumvent censorship, to get out of isolation, to connect with the world and make another reality possible, even if only on the paper of the envelopes and letters mailed.

Yet, the postal system is still an administrative apparatus managed by the authorities, where mailings are subject to bureaucratic control. In this sense, and parodying Zabala, it can be said that Mail Art is somewhat prison-like too. That is why it is a practice meant to make not only the channels of the official art system overflow, but also those of the very system through which it operates. With magnificent and transgressive eagerness, the artists played at designing their own postcards and stationery, and appropriated the production of postage stamps, postmarks and rubber stamps. These elements of postal administration became domains of artistic expression and denunciation of social injustice and oppression. To give some examples, G. E. Marx Vigo (hybrid name of the creative collaboration between the Argentine artists Edgardo A. Vigo and Graciela Gutiérrez Marx), designed postage stamps with butterflies whose flight is stopped by bars; and on their cards the word «FREE» is displayed above «JAIL». Horacio Zabala, for his part, stamped his postcards as if they had been reviewed by the censors, while the Chilean Guillermo Deisler gave explicit geography lessons from his exile in Bulgaria. 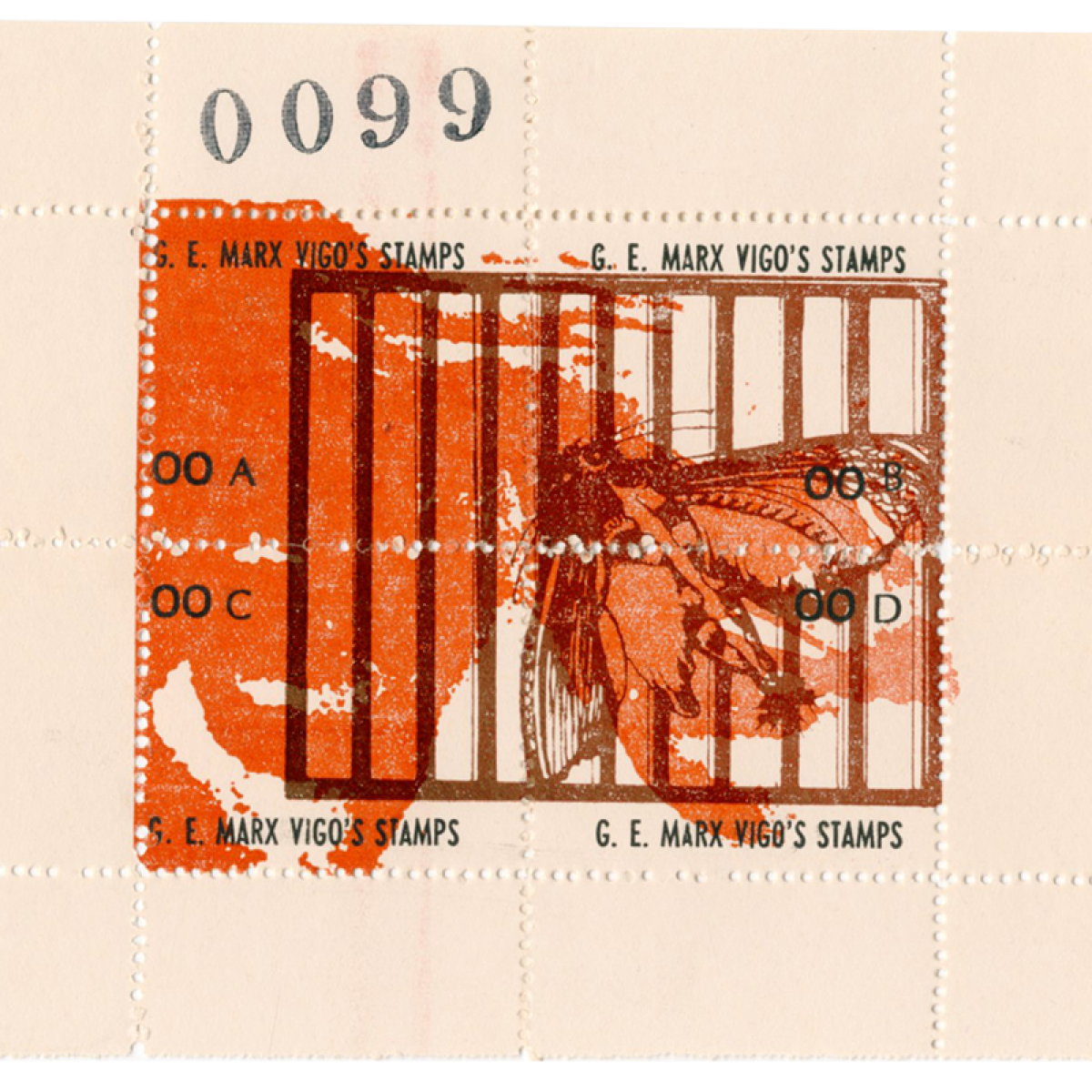 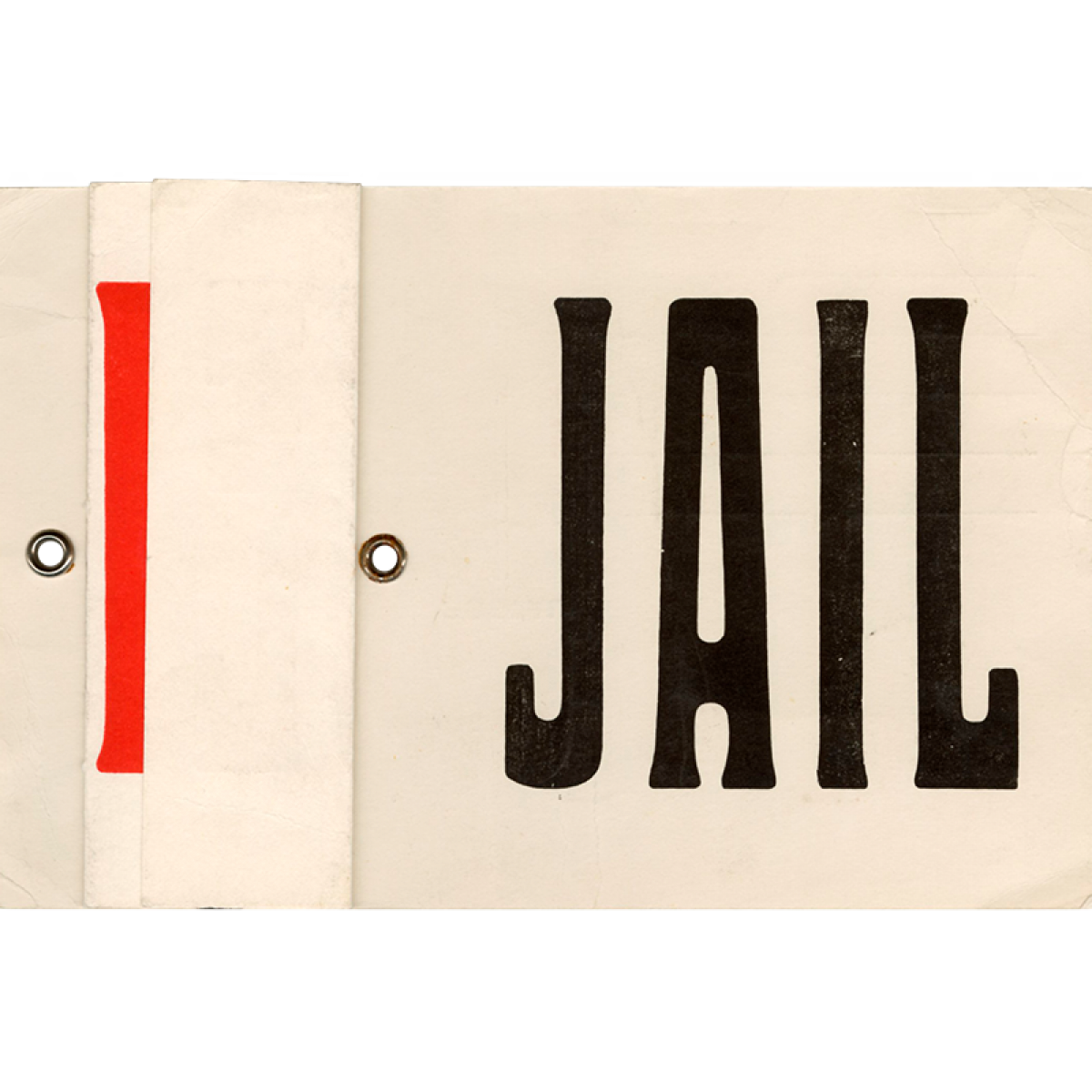 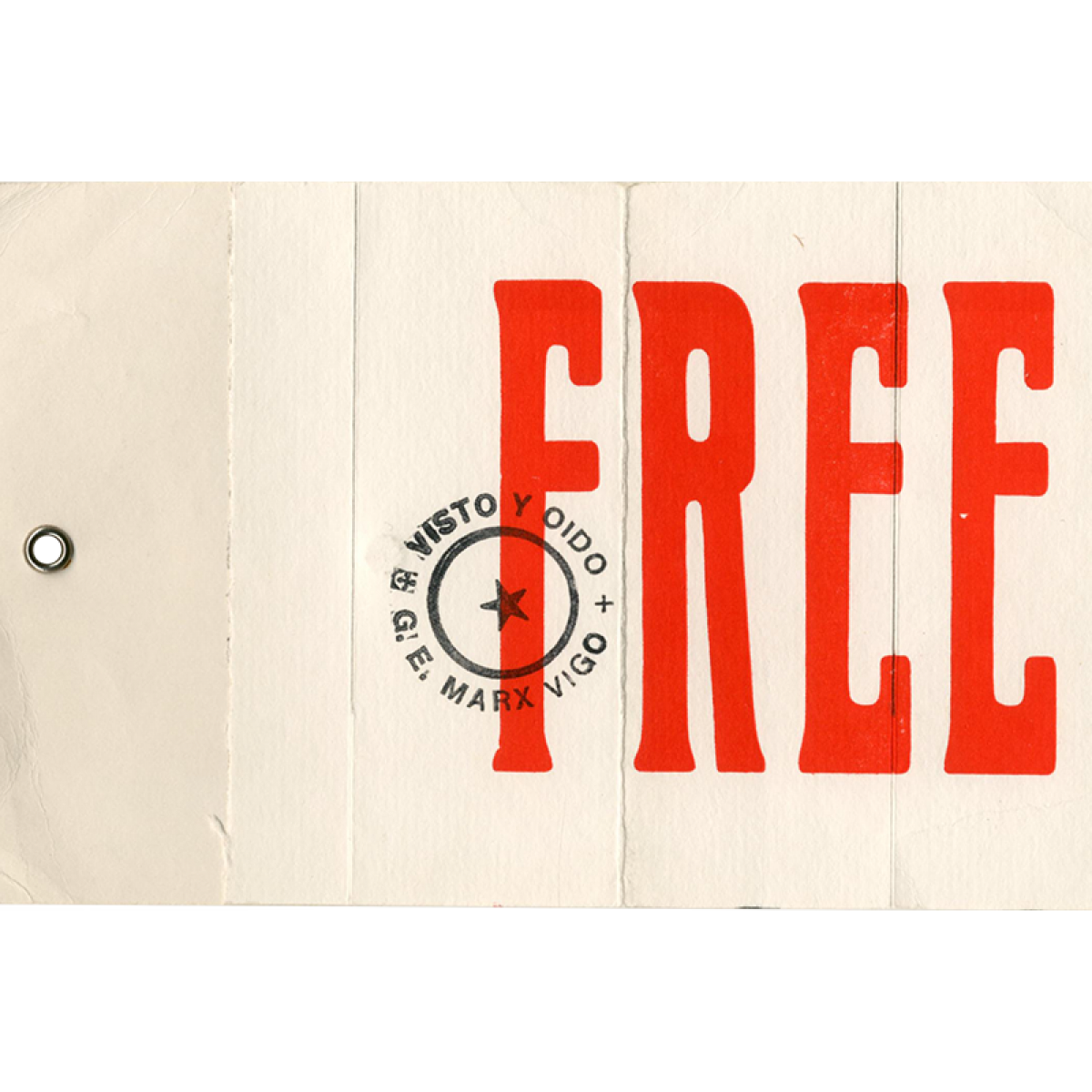 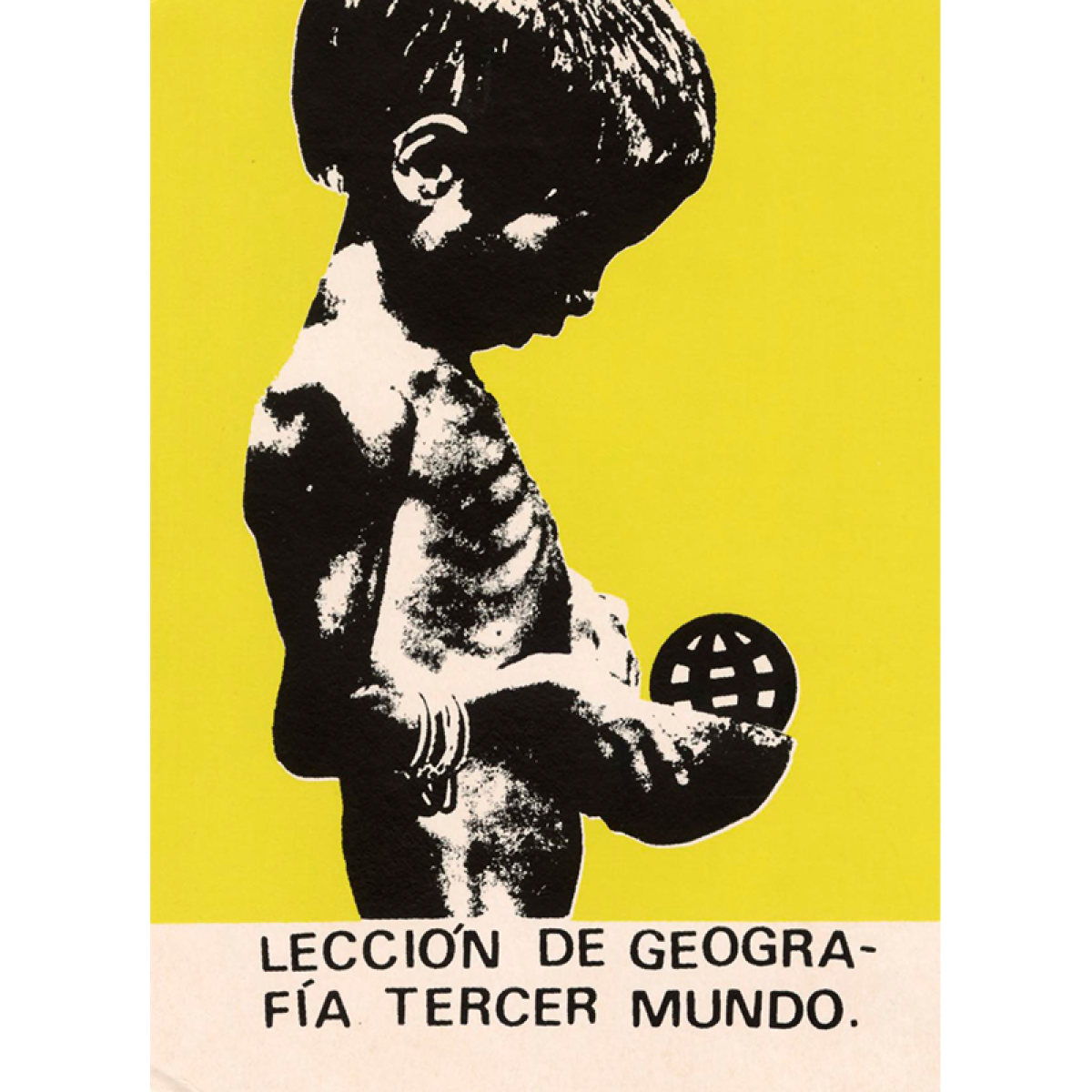 
In the Mail Art networks, the bureaucratized postal system gave wings to artists condemned to silence or exile. However, it also sometimes landed them in jail. This was the case, in 1977, of the Uruguayans Clemente Padín and Jorge Caraballo, who criticized the violation of human rights in their country by means of Mail Art and visual poetry: Padín did so with postage and rubber stamps and Caraballo with poems assembled from the leftover stamps and scraps of cardboard he found in the course of his work as a customs agent. Their sentences were harsh. Padín, for example, was sentenced to four years for the crime of «Scorn and Vituperation of the Moral Forces of the Armed Forces». In the Mail Art networks the news spread like wildfire, provoking an «intense and permanent mobilization of hundreds and hundreds of supportive artists all over the world». In Amsterdam, the Mail Art magazine Ephemera, edited by Ulises Carrión and collaborators, included on its cover a reproduction of a handwritten text announcing that «PADIN AND CARABALLO ARE IN JAIL!» and urged its readers to request information and pass it on, something they could easily do by writing to the address included in the pages of the magazine itself. Mail Art thus emerged as an informative network through which the news that official bodies sought to conceal could flow. (5) 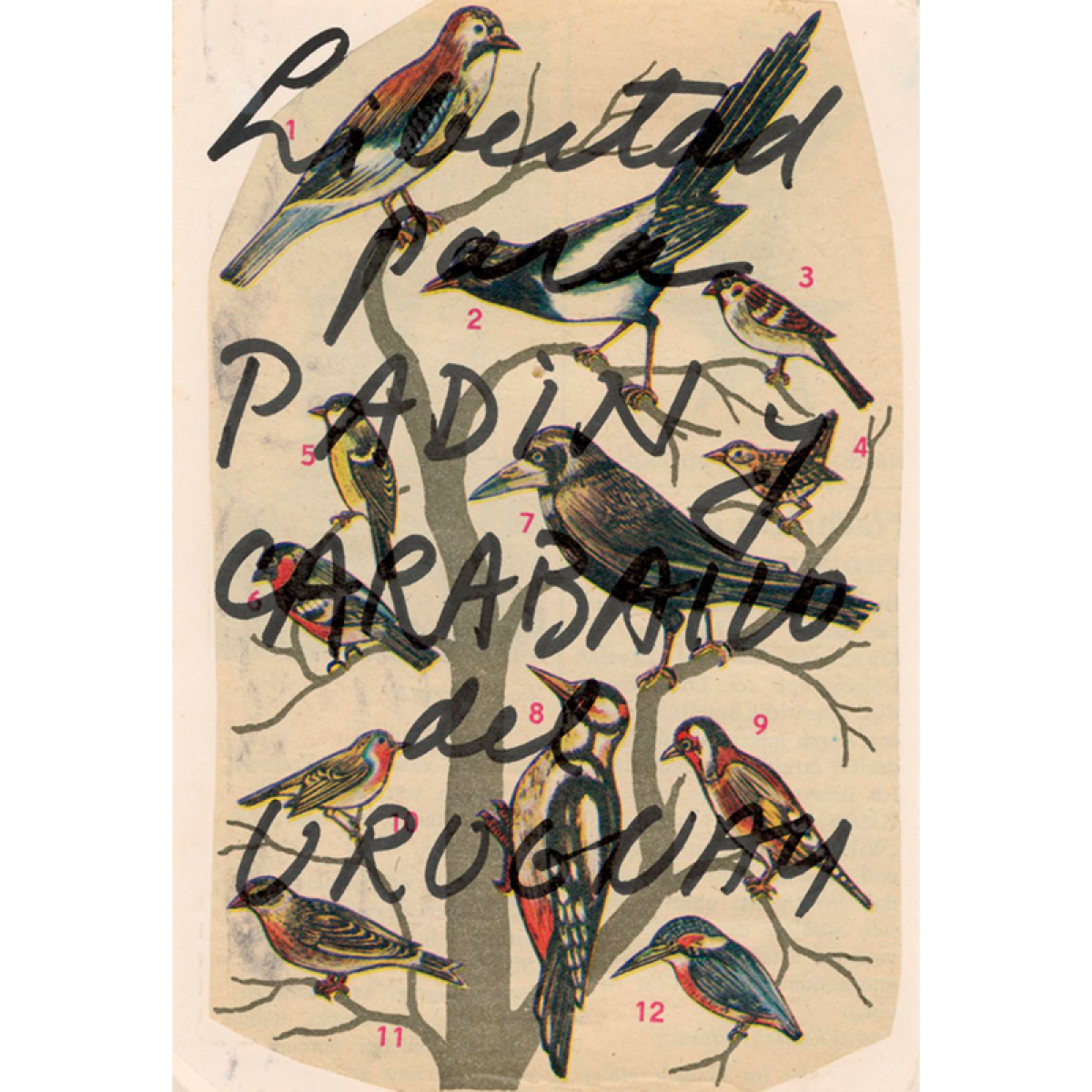 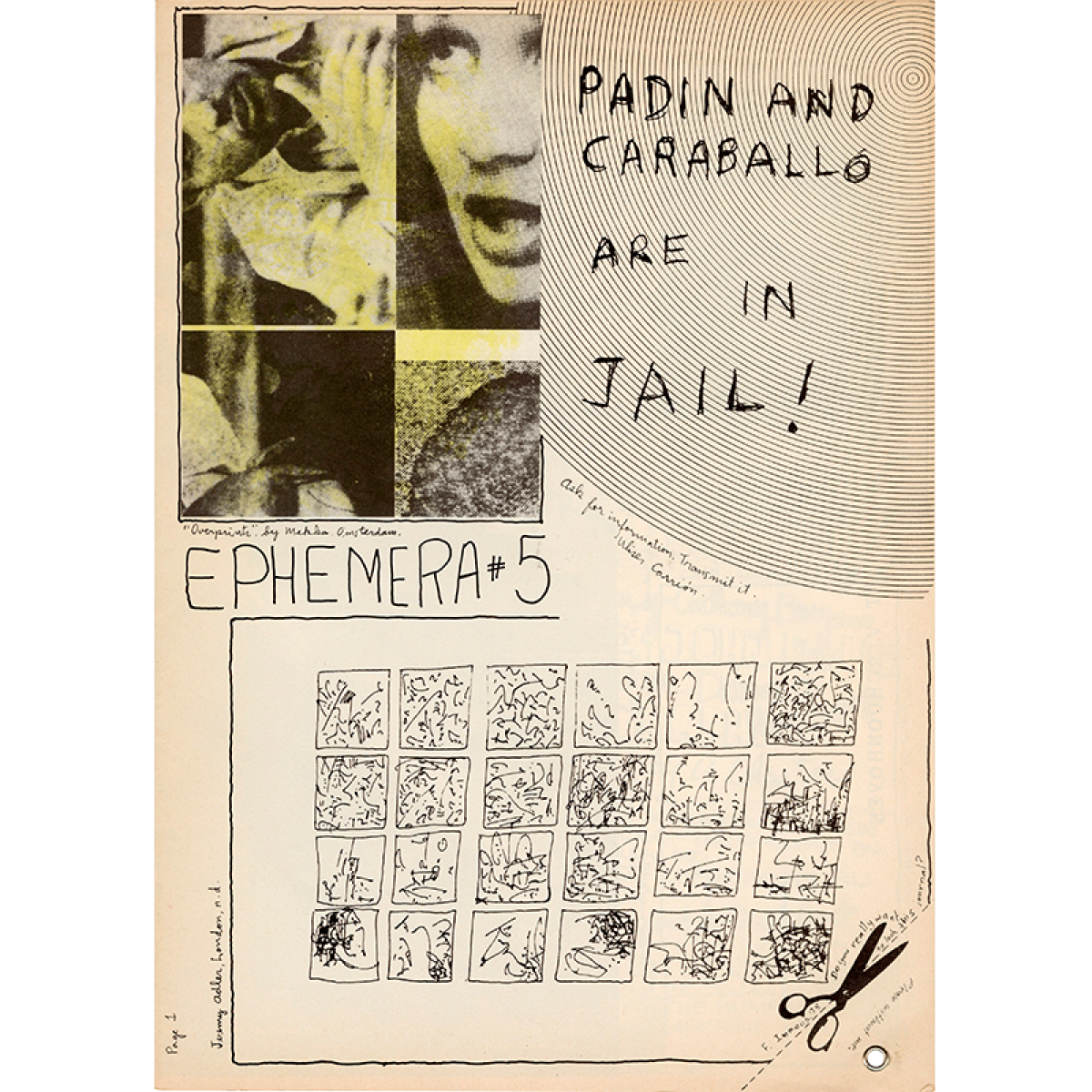 
Thanks to the international response to the imprisonment of these artists, Padin was able to leave prison after serving «only» two years and three months. Yet, the ambivalence about the postal system as both an alternative pathway and a bureaucratic apparatus did not cease to worry Mail Artists, and there was no shortage of proposals to work around it in one way or another. In 1978, for example, Carrión devised and launched the Erratic Art Mail International System, or E.A.M.I.S., as «an alternative to the official post offices» that allowed free mailings through his own office, located in his OBAS space. The circulation of mail could be accomplished by any means outside «national bureaucracies»: the sender, or someone else on his/her behalf, could take his/her letter to OBAS, where it was deposited until someone (a friend, an acquaintance, a visitor), volunteered to transport it to its destination. This system parodied the state ones, establishing criteria to demonstrate authenticity such as its own postage stamps and rubber stamps. Importantly, it was not effective, nor did it attempt to be; rather, it was set up to promote reflection and a collaborative game among the network of Mail Artists. E.A.M.I.S. was operational for two months, during which time it dispatched twenty-four envelopes and packages to their destination, leaving nine undelivered because no courier could be found. (6)

Graciela Gutiérrez Marx, meanwhile, created a Temporary and Lateral Post Office [Estafeta Postal Temporaria y Lateral] in 1979. Its center of operations was located in el Jardín de Infancia Número 38 [Preschool Number 38] in La Plata, Argentina. This initiative was centered around the children who studied there and it involved the collaboration of artists from all over the world. The activity consisted of the children creating their own postage stamps and then using them to postmark their mail: drawings, cut-outs, sticks and other materials for their siblings, friends, classmates, parents, grandparents and so on, which they placed in a mailbox made by Vigo for them. With the complicity of a letter carrier who risked being punished for delivering mail without official postage, the letters reached their recipients, bringing the children «directly into the poetry of communication WITHOUT BUREAUCRACY» (7). As for the collaborating artists, they participated in different ways. Michael Scott in England, for example, photocopied stamps designed by the children. Others, such as Robin Crozier, Peter Below, Vittore Baroni, Guglielmo Achille Cavellini and Leonhard Frank Duch, made stamps for them. Gutiérrez Marx matched them randomly with those of the children, and with each pair she prepared cards bearing a «First Day of Issue» postmark and the inscription «I was received from Jardín» for the children who were in their last year of preschool. (8) 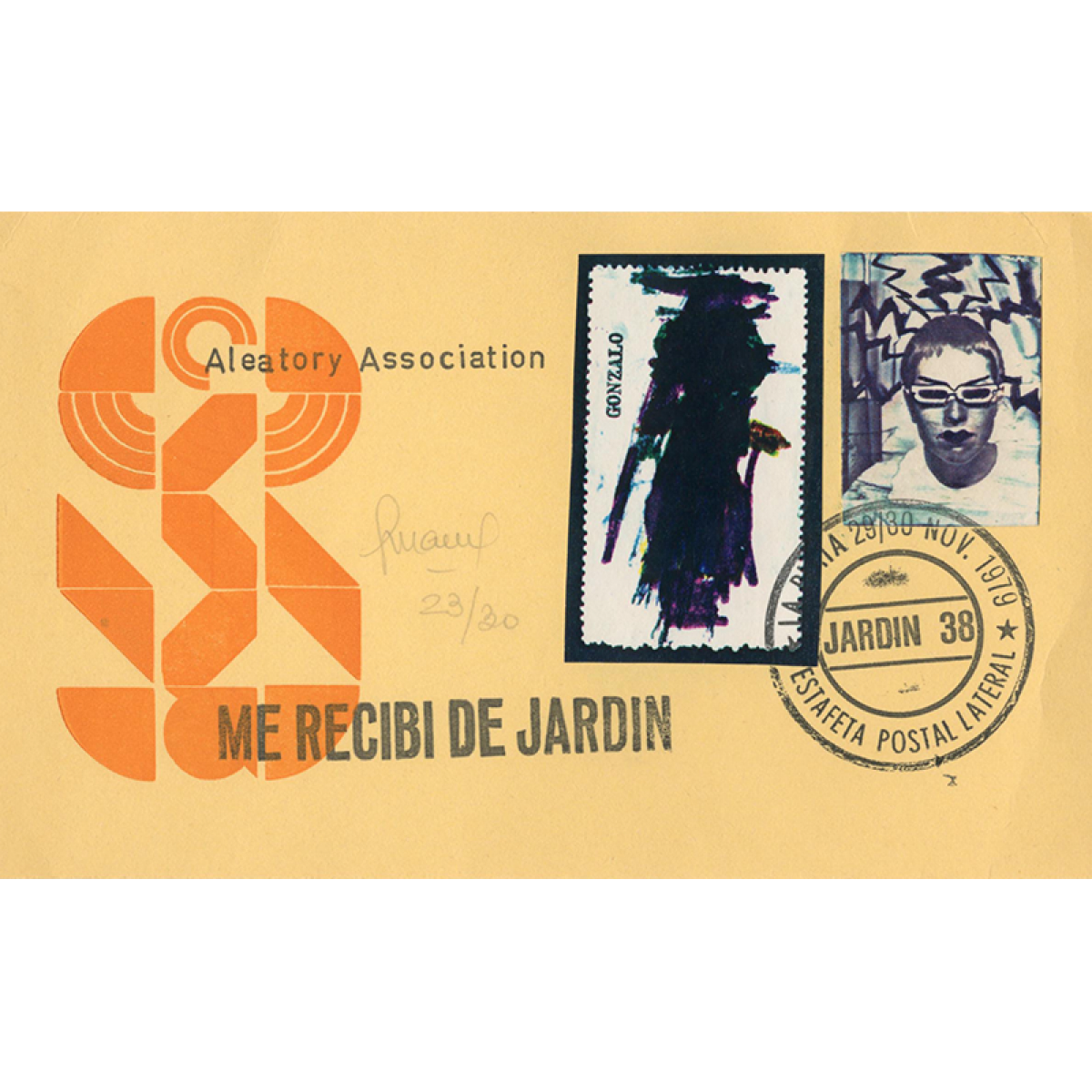 
To summarize, Mail Art emerged as an alternative not only to the official art system and the mass media, but to the global geopolitical order reflected in them as well. It was an underground phenomenon that, through its fringe pathways, transcended the limits of the artistic and political institutional order by means of a strategy as modest as it was persistent in its occupation and appropriation of the postal bureaucracy. Through its networks, another world was possible. In that world, «pigeons of freedom» flew over—or under—the borders imposed by the hierarchies of power, reviving Marinetti’s «parole in libertà». That was at least the intention of G. E. Marx Vigo when they invited their far-flung friends to contribute with a rubber stamp to the issue of Commonpress, which two artists jointly edited in 1979. A collaborative project like no other, Commonpress was a Mail Art magazine conceived by the Polish artist Pawel Petasz. Each issue of the publication had a different editor and was produced through mailed out calls for submissions. Marx Vigo chose a theme that symbolically gave air back to the thousands of voices strangled by the Argentine civil-military dictatorship, including Vigo’s eldest son, Abel Luis, known as Palomo, who disappeared in 1976 after the coup d’état. Marx Vigo’s proposal was simple: send a stamp designed by each of them with the theme «colomba in libertà», together with another one with his name. They stamped and reproduced them on loose sheets that, gathered inside a cardboard box under the name of Commonpress, circulated again through the Mail Art networks, like paper carried by the wind. 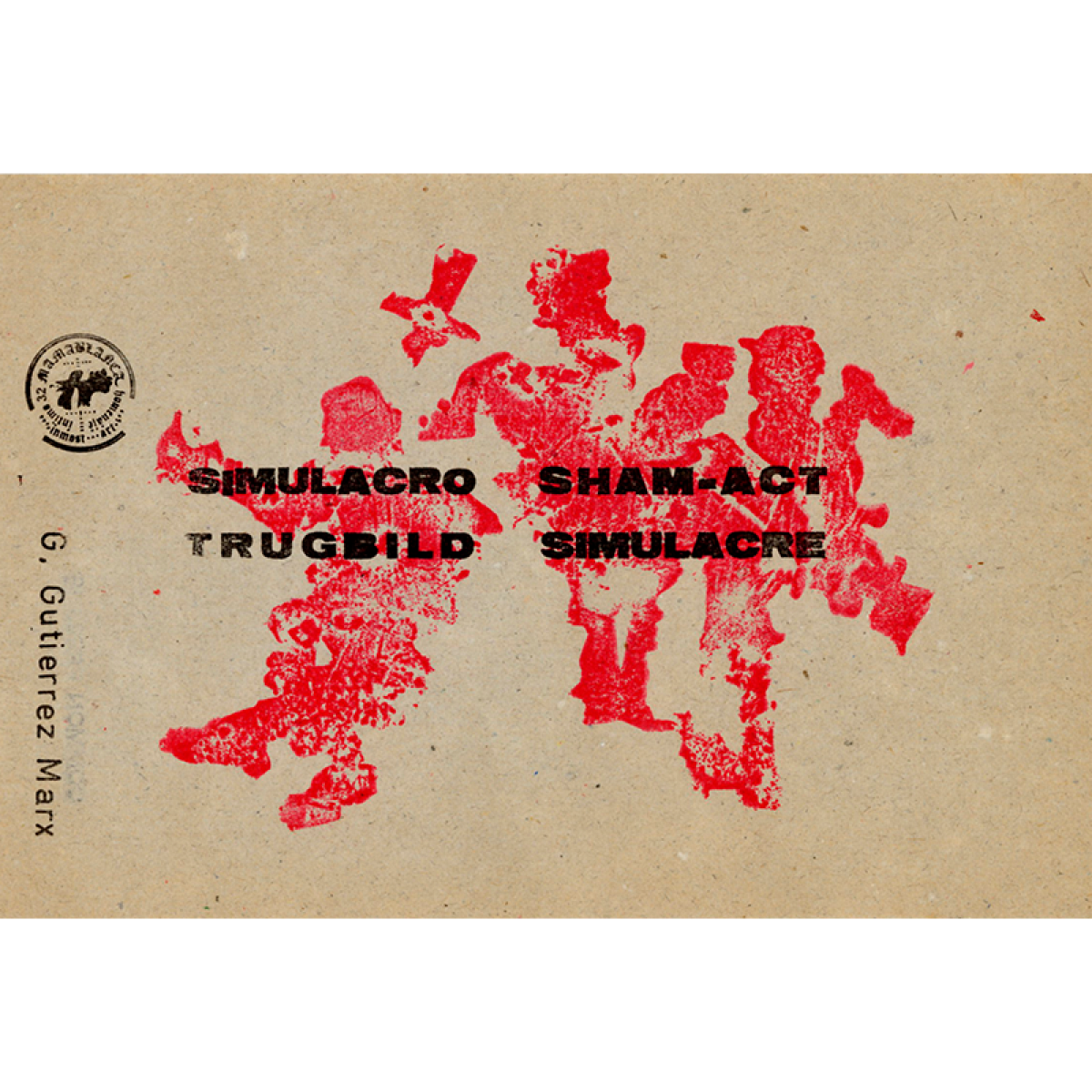 Postcard Art? A prison? sent by Zabala to Carrión, 8 August 1977

(5) Vigo told Carrión, for example, of his frustration at the impossibility of obtaining «any information on the real situation» of Padín and Caraballo, despite living in a neighboring country, because of the «secrecy and confusion employed». Vigo in letter to Carrión dated February 21, 1978 (Archivo Lafuente, Ulises Carrión Collection, Correspondence of Edgardo A. Vigo).