The magazine Poesía [Poetry] is one of the most surprising and exciting projects in the history of cultural publications in Spain. Its launch in 1977 occurred within the context of the enormous newfound creative freedom of the early years of the transition to democracy—a freedom that on some occasions relied on the complicity of the government. It was the auspicious union of imagination and means of production which favored the flourishing of this masthead, legendary for its quality, experimentation, sensitivity and hedonism.

In 1977, the Ministry of Culture decided to give a new lease of life to one of its longest-running institutional publications. Created in 1952, the magazine Poesía Española, later Poesía Hispánica, was in need of new blood, and under the orders of the UCD minister Pío Cabanillas, the green light was given for a young team to take the helm, replacing José García Nieto’s. On the advice of the historian Santiago Amón and the architect Antonio Fernández Alba, Cabanillas placed the poet and publisher Gonzalo Armero, then aged 30, in charge of the project. Armero recruited his friend the designer Diego Lara, 31, for the endeavor. Although there was initially a small editorial committee made up of Amón himself, José Miguel Ullán, Mario Hernández and Joaquín Puig de la Bellacasa, it was eventually dissolved and Armero assumed responsibility for the bulk of the editorial decisions. 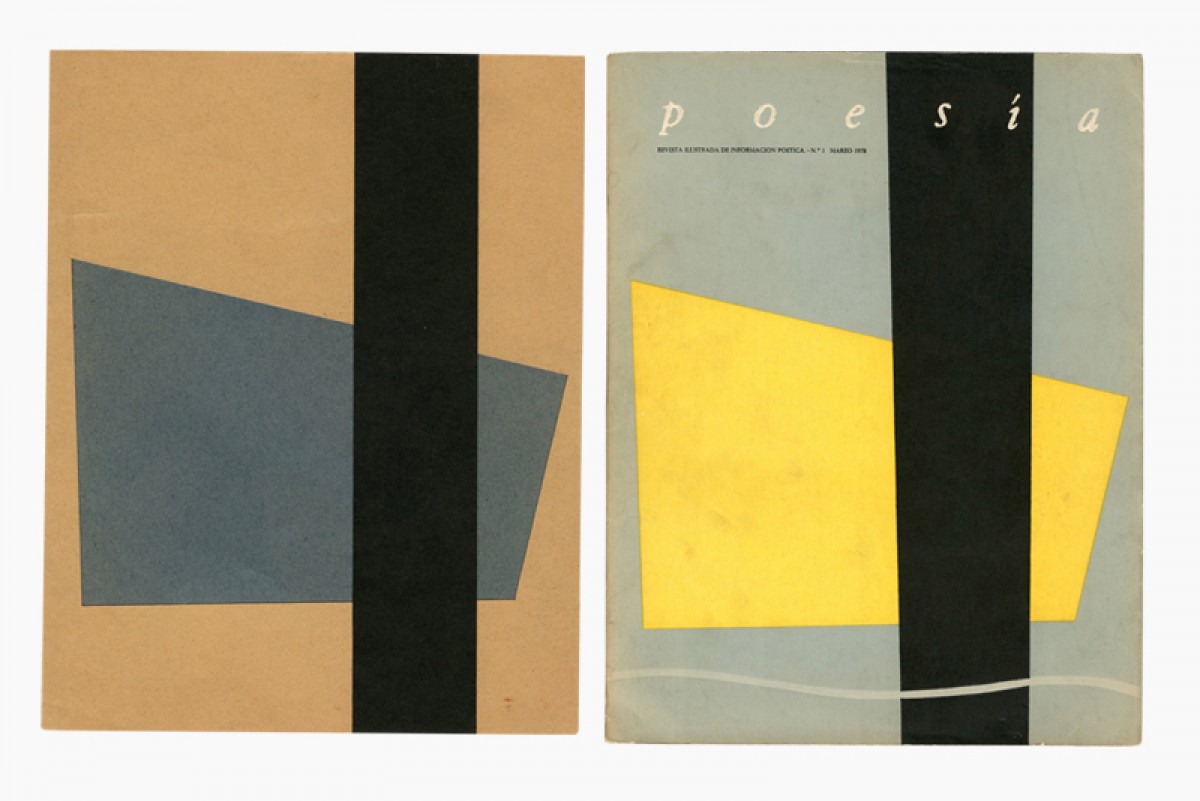 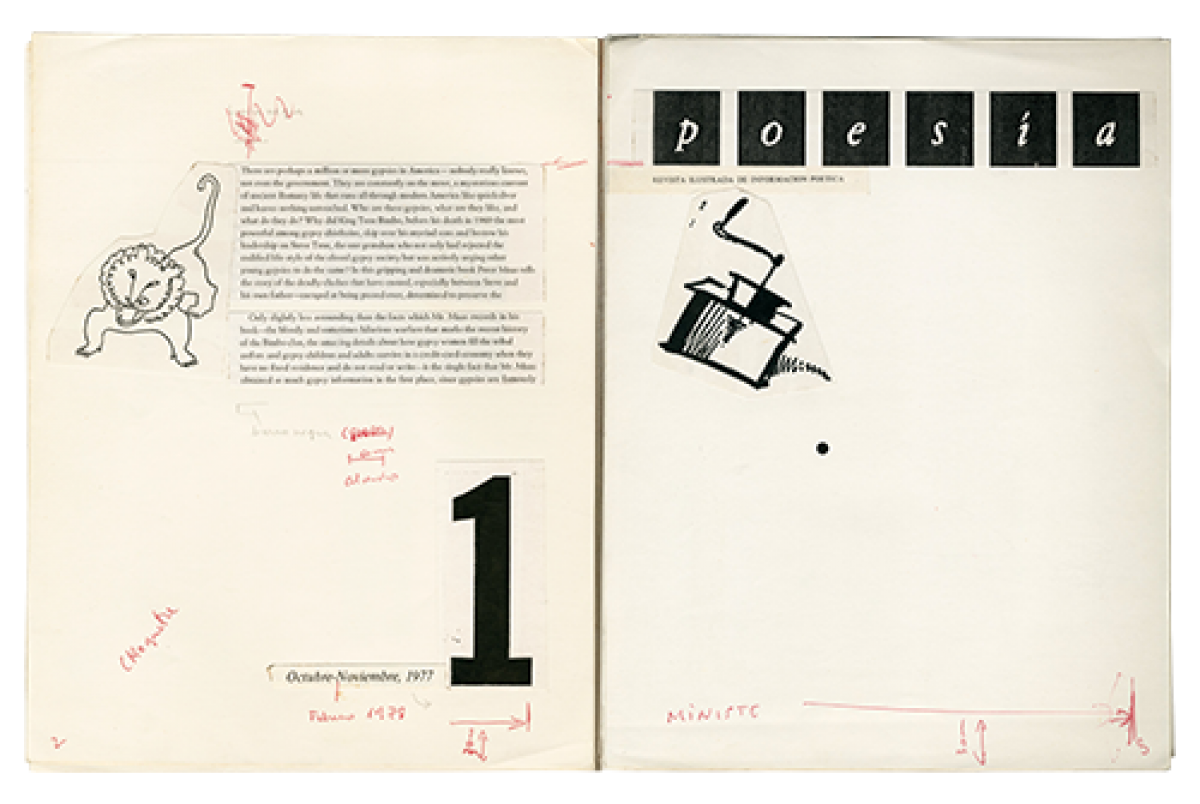 
The magazine would be renamed Poesía. Revista ilustrada de información poética and, in a visionary and courageous move, the publication would leave aside academic topicality, and its concomitant institutional burdens, in favor of a new unprejudiced and eclectic perspective. In this revamped Poesía there would be room for photography, music, essays, painting, art and architecture too.

In March 1978, the first issue was published. Almost impossible to find nowadays, Archivo Lafuente preserves it together with one of the most complete collections of Poesía in existence—something exceptional as the publication used to carry all kinds of inserts, games, fold-outs and gadgets that have barely survived in their entirety. Different paper types were used in each issue (offset for the texts and glossy, vegetable or cardboard for the images), and all kinds of typefaces and typographic styles. During the 16 issues that Diego Lara was first graphic director and then deputy director, the magazine reflected his passion for collage. From the cover of the first issue, the mockup of which is still preserved, to the overall concept of the publication itself, collage was a form of expression closely linked to the thinking and aesthetics of the project. In that historic issue, renowned names were mixed with others which, at the time, were very much on the fringe. Thus, alongside Jorge Guillén and Vicente Aleixandre were Francisco Pino, Rafael Sánchez Ferlosio and Kurt Schwitters. The only two editorials ever to be published in the magazine’s entire history were also included in that first issue. Gonzalo Armero wrote one of them, a hymn to «that inaccessible human parcel that is poetics, with such imprecise limits so as to hinder any definition», in which he recalled the elusive nature of poetry, its eternal modernity and uselessness, «although in it lies the most valid part of man». 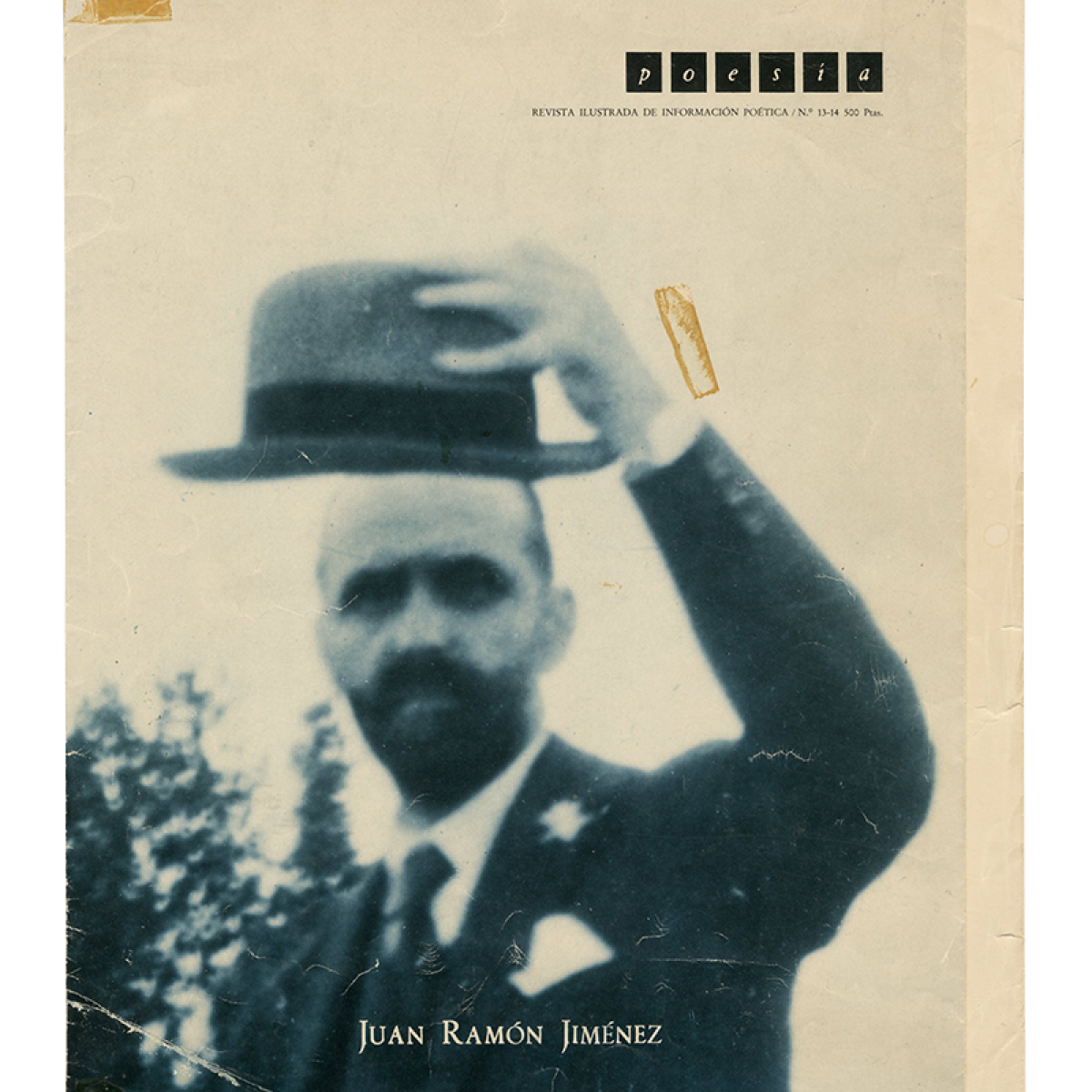 
The other editorial is one of those brilliant ideas that arose in that agora of passion and thought hidden in Madrid’s Rastro. Armero himself recounted it in a lecture given on November 30th, 2005 at the Fundación del Colegio de Arquitectos de Madrid as part of the cycle «La ciudad, las ciudades»: «The real editorial of the magazine was an editorial trouvé. Shortly before issue number 1 came out, in the Rastro, in Madrid, in the Plaza de Vara del Rey, which at that time at least was frequented by second-hand clothes dealers, and in the middle of one I found a large album of calligraphy by a Catalan penman called Ramón Stirling from the end of the 19th century—a marvelous book—, and in between the pages I found a print with a calligraphic text, which is reproduced in the issue of the magazine, in a diptych, where I found everything I wanted to say and didn’t know I did. It says: ’After the gift of speech, there is nothing more precious than writing; for it is a second word; it is the material interpreter of our thoughts, it is an astonishing vehicle which transports our ideas from the areas of one hemisphere to those of the other. By it, all the nations of the globe have been brought into contact; by it, we know what happened in the remotest centuries; and by it, finally, posterity will know the sublime actions of the heroes of every age; the great discoveries of every era, and the universal history of everything created’». «After twenty-five years», added Armero, «I’ve realized that I’ve been radically faithful to this editorial; I’ve tried to make a modest but amazing vehicle to tell and put in contact some things with some people [...] and there is recorded what the magazine was». 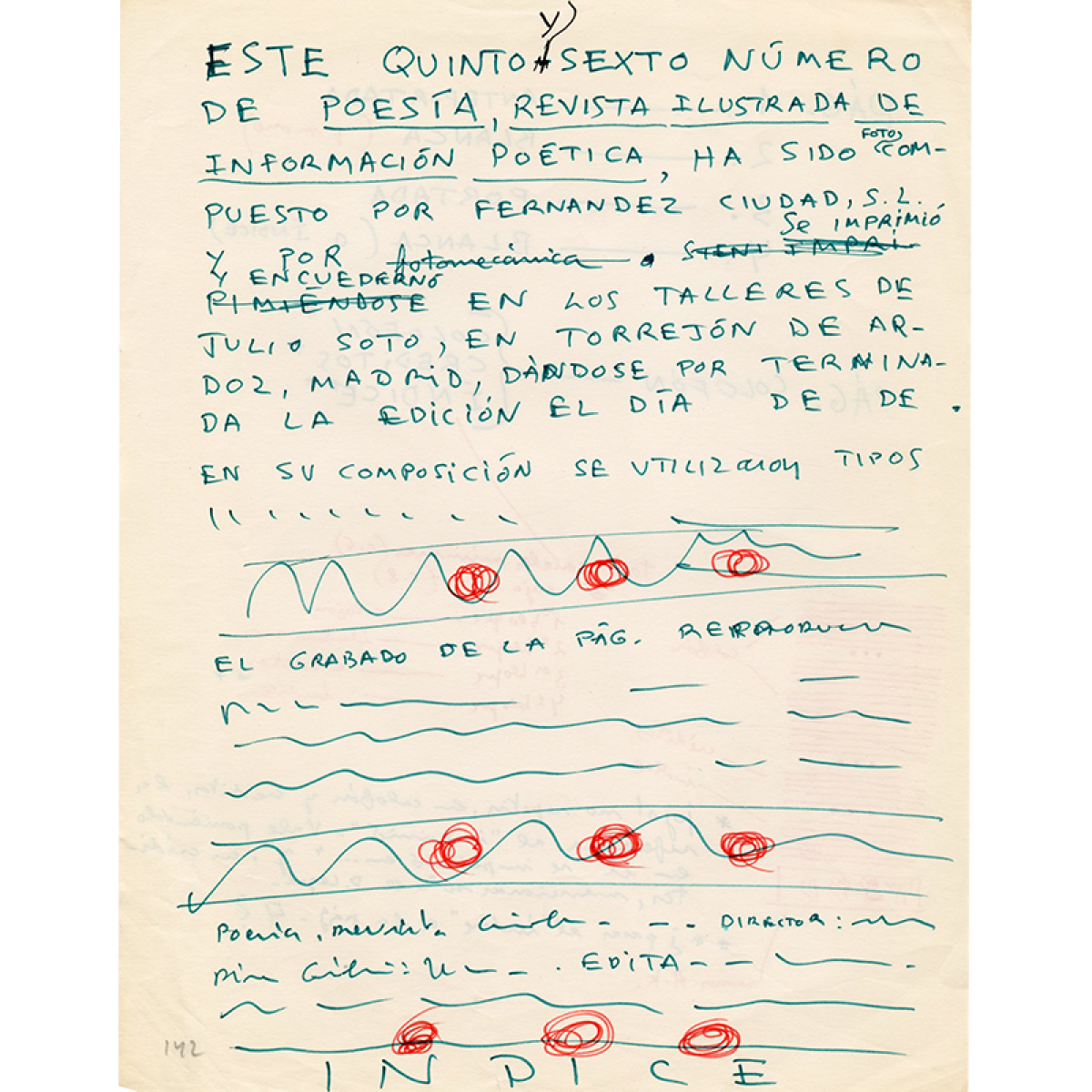 
Many of the best ideas in Poesía were conceived in bars around Madrid in the wee hours of morning. In that first issue which we now evoke, Constructivist and Dada publications were invoked; as were Verve and Nueva Forma, as well as Playboy and Life, and the legacy of Juan Ramón Jiménez and his disciples: «Juan Ramón was the one who brought the Saxon way of publishing to Spain», said Armero. And it was only in that first issue that the minister in office asked to see the contents before going to print. «I took it to Pío Cabanillas, he leafed through it and said: "Very good"». That «Very good» was followed by 45 gems, including monographs dedicated to Juan Ramón himself, Fernando Pessoa, Picasso’s Guernica, Rimbaud and Don Quixote, all of which, removed from editorial pressures and trends, have managed to stand above any time. 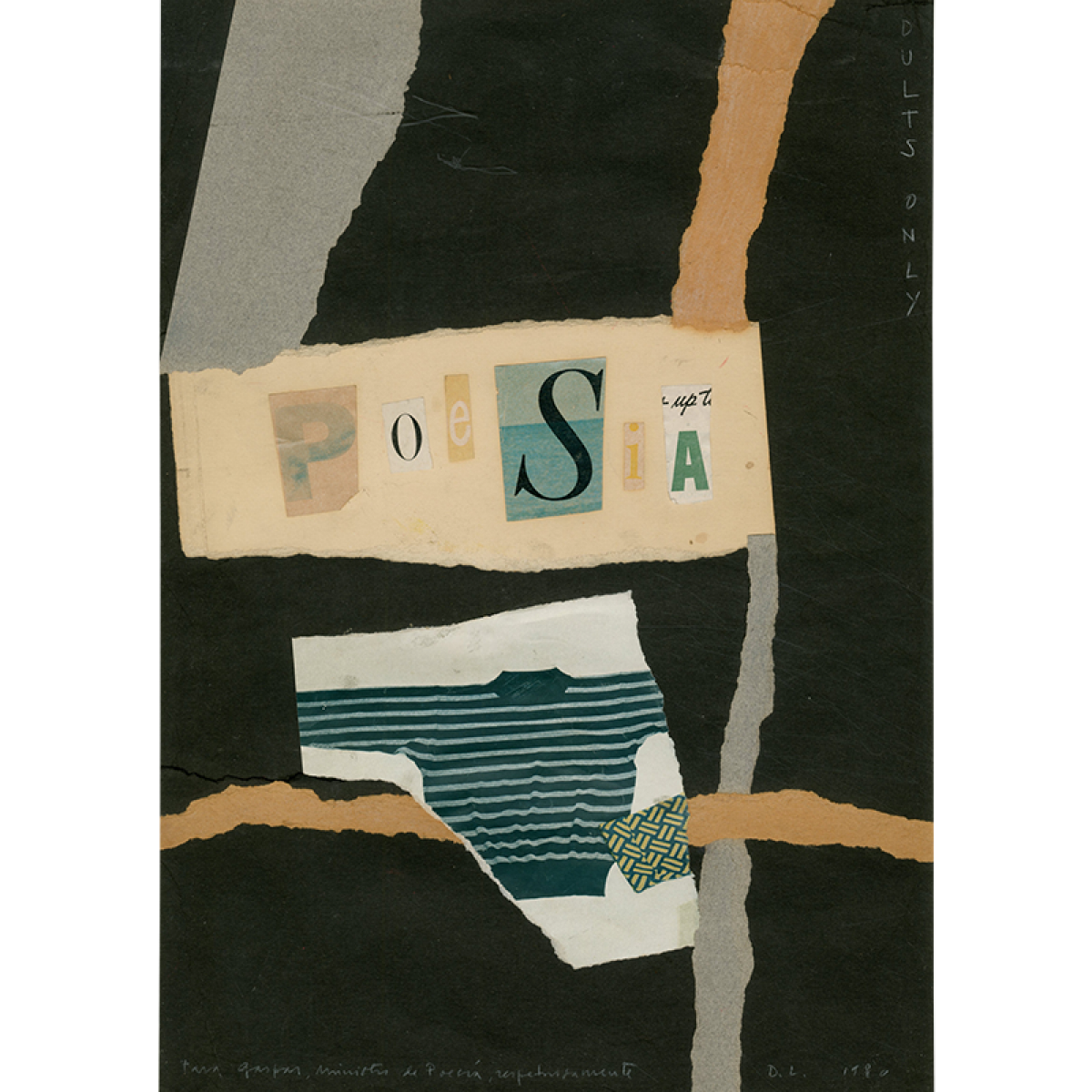 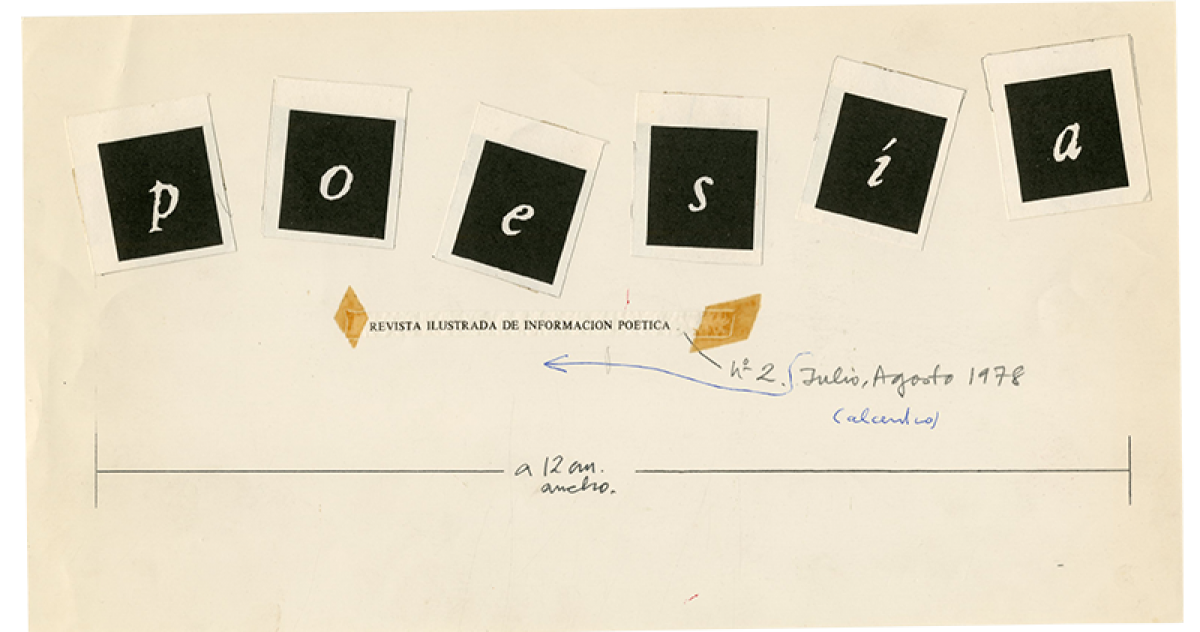