The way we perceive the real world is shaped by the concepts and experiences we possess and accumulate throughout our lives. Our perception of our surroundings is individual and polysemic—the product of a gradual transformation that leads us towards the creation of a personal visual language in which we accumulate tradition and memory. The images stored in our minds emerge and fade away, unconsciously activated by the circumstances of our perceptual experience at each moment as well as by the symbolic and conceptual potential they express. The experience that shaped Juan Navarro Baldeweg’s conceptual universe is a noteworthy instance of this process. It took place during his stay at the Center for Advanced Visual Studies (CAVS) at MIT, an opportunity that was afforded to him thanks to a study abroad grant awarded by the Fundación Juan March between September 1971 and June 1975, several years before he constructed his first buildings.

In one of the monthly reports he sent to the Fundación Juan March (1), Navarro Baldeweg relates this idea to a text by Nathan Silver entitled «Architecture without buildings» (2) in which he identifies "intention" with «architecture», without the latter necessarily being associated with physical form. In this text he states that «[t]he idea that there is an architecture without buildings, as opposed to a functionalist vision that integrates form with function and the built object with its use or purpose, is a consequence in certain cases of an understanding of the semiological use of the natural and artificial environment in the manner of a readymade». Through this approach, he seeks to overcome functionalist principles and formal typologies in order to draw closer to those theses which explain the medium as «a system of communication or as a typology of uses determining its ’form’ or an understanding of the surrounding forms" (3).

Nathan Silver’s text, whose title stands in opposition to that of the exhibition "Architecture without architects» organized by Bernard Rudofsky in 1964 at the MoMA, refers to the «instant» of architecture, to its first «intention». Silver poses that architecture is a system of people, and not of things, which requires the presence of an architect to define or select that first intention, intuition or attempt, without it being necessary to objectify it in the form of a building that contains it. This is a definition that he extends, for the sake of comparison, to music without musical instruments or literature without typography. It is a space open to the imagination. «The creative event took place in this initial moment», asserts Silver; architecture exists as soon as an intention to convey something appears, as part of a complex system of communication that affects people and things. «There is always an architect. The man in the street makes the city», but it is necessary to free our thinking from the «oppressive assertion that architecture means buildings».

This allusion to the «instant» recalls one of the first pieces that Navarro Baldeweg made at MIT in 1973, entitled The Column and the Weight [ill. 1]. This might be because of the simplicity of execution involved in arranging a small weight next to a column in a busy area in order to photograph that moment, or perhaps it is due to the complex interpretation of its content and the doors it opens as an «intention» with the aim of understanding that this action is steeped in architecture. It is something similar to the experience of the «readymade» or that first moment of the architectural design process in which, without knowing why, it is possible to identify the validity of an idea or an argument.

The Column and the Weight is an enigmatic and suggestive image taken by Navarro Baldeweg himself in one of MIT’s lobbies (Lobby 7 to be exact), which is why it was initially called Lobby Piece. Beyond its intrinsic meaning, this work—the first of his works on gravity—marks the beginning of a new approach on which he will base many of his later projects, despite dealing with a classic and ever-present theme in architecture such as «gravity». As he asserts in the aforementioned 1972 monthly report, architecture must place itself in a much more generalized cultural system and question cultural needs themselves; it must involve itself in the creation of symbols which condense certain ideas or values that serve to orient the users of natural phenomena and which, in short, serve to promote or raise awareness of the relationships occurring in nature and its symbolic systems. That is to say, architecture must ground itself in a better understanding of the environment, considered from a semiological point of view. 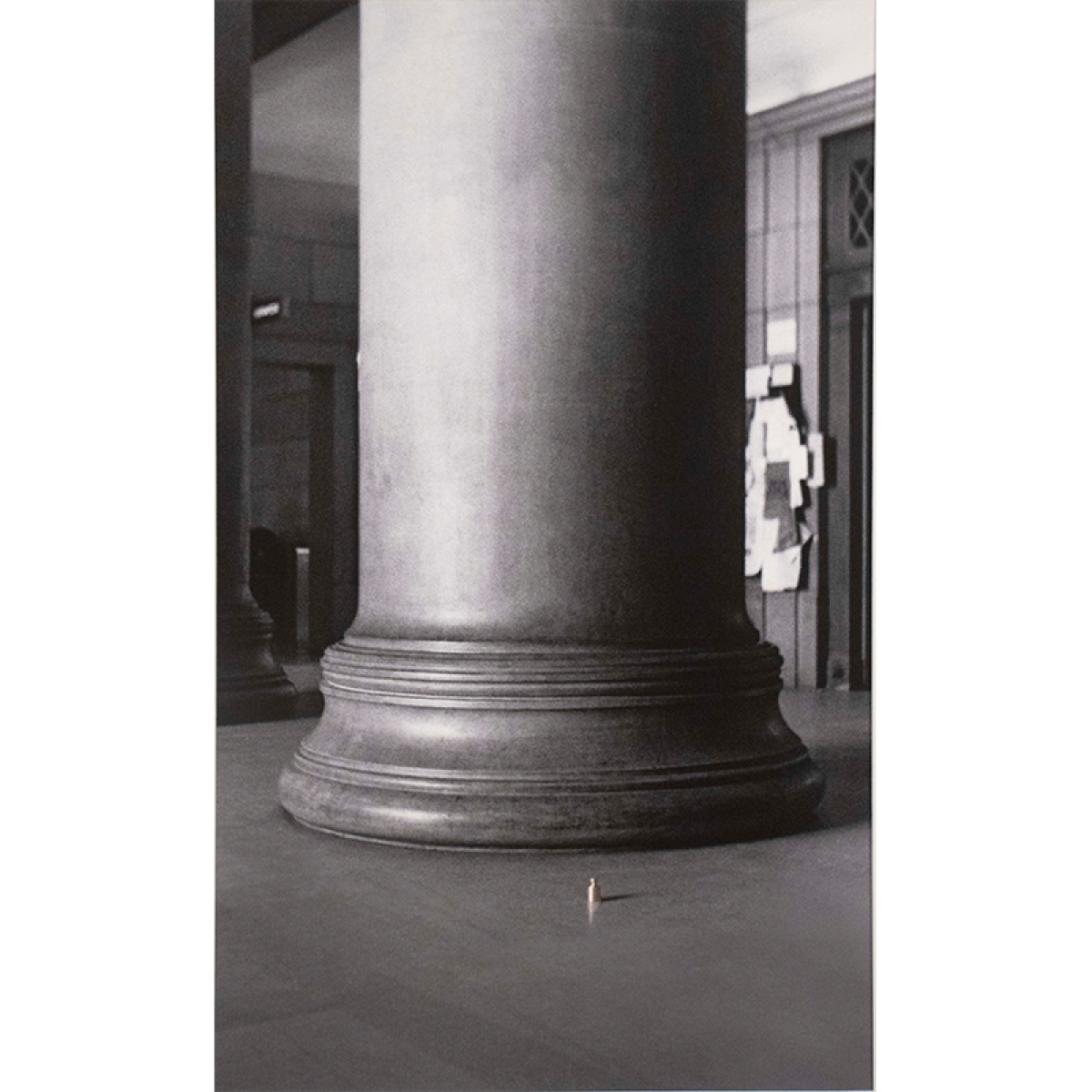 
The interest shown by Navarro Baldeweg in the incorporation of information in the city and the environment as a communicator of messages is already evident in the model entitled Sounding Mirror, which accompanies his 1970 text entitled Arquitectura informática. However, the focus of this project and its argumentation would be redirected during his stay at the CAVS by the influence of its director, professor Gyorgy Kepes, in the weekly meetings held at the center on environmental design. Another meaningful source of influence in this matter was the contact Baldeweg had with important artists, theorists and experts on the subject such as Rudolph Arnheim, Charles W. Moore, Isamu Noguchi and Kevin A. Lynch, all of whom were present at the forum Art and Environment, held in February 1972 at MIT’s Kresge Little Theatre, and in which the architect himself also participated.

In order to understand architecture from a semiological standpoint, Navarro Baldeweg resorted to the 1969 compilation of essays on this subject by Charles Jencks and George Baird under the title Meaning in Architecture (4), which also included the aforementioned text by Nathan Silver. This publication—which contains among the references cited, reports no. 4 from December 1971, no. 5 from January 1972 and no. 7 from March 1972—includes an early text by Charles Jencks, entitled «Semiology and Architecture». Baldeweg would go on to extract the most important idea from semiology pertaining to architecture, which states that «any form in the environment or any sign in language is motivated or is capable of being motivated» (5); this was translated into his research as «Every environment is implicitly significant with regard to the social relations that develop in it» (6).

Reference to the column as a significant unit linked to the other classical-order elements by means of a dually associative and syntagmatic nexus, in accordance with the principles of Sausurre and his disciples, figures in several of the essays compiled by Jencks and Baird. In particular, in the text by Geoffrey Broadbent entitled «Meaning in Architecture» a reference to the «privative» binary opposition is cited, which is used in language to «mark» a signifier in a singular way and thereby eliminate other possible meanings, as occurs in the relationship established between the weight and the column of the piece. In this image the weight is like a sieve that, in a metaphorical sense, allows only those stimuli for which it has an appropriate opening to be filtered out. Conceptually, the weight obscures and diminishes the view of the column, but it also manipulates the more distant and preconceived layers of its meaning that we hold in our memories.

Another reference to the classical column appears in the bibliography employed by the architect in his preparation of that same monthly report, including a book by Alexander Tzonis (7) which reproduces an illustration by L. B. Alberti of the different proportions of the Ionic order. It is true that the neoclassical column serves as a touchstone for any architect or student of architecture, especially those from the treatise writers’ illustrations. Nonetheless, it is surprising in this particular case that Tzonis’s text uses this illustration of different column-section proportions to explain Alberti’s claim that the visual models could be very «valuable in and of themselves», yet what made them notable was their «composition, their grouping». This is surprising because it is precisely this top-view composition of the shaft and the base of an Ionic column that determines the background of the piece and which was present in a place that Navarro Baldeweg unconsciously crossed daily to reach his studio at MIT. 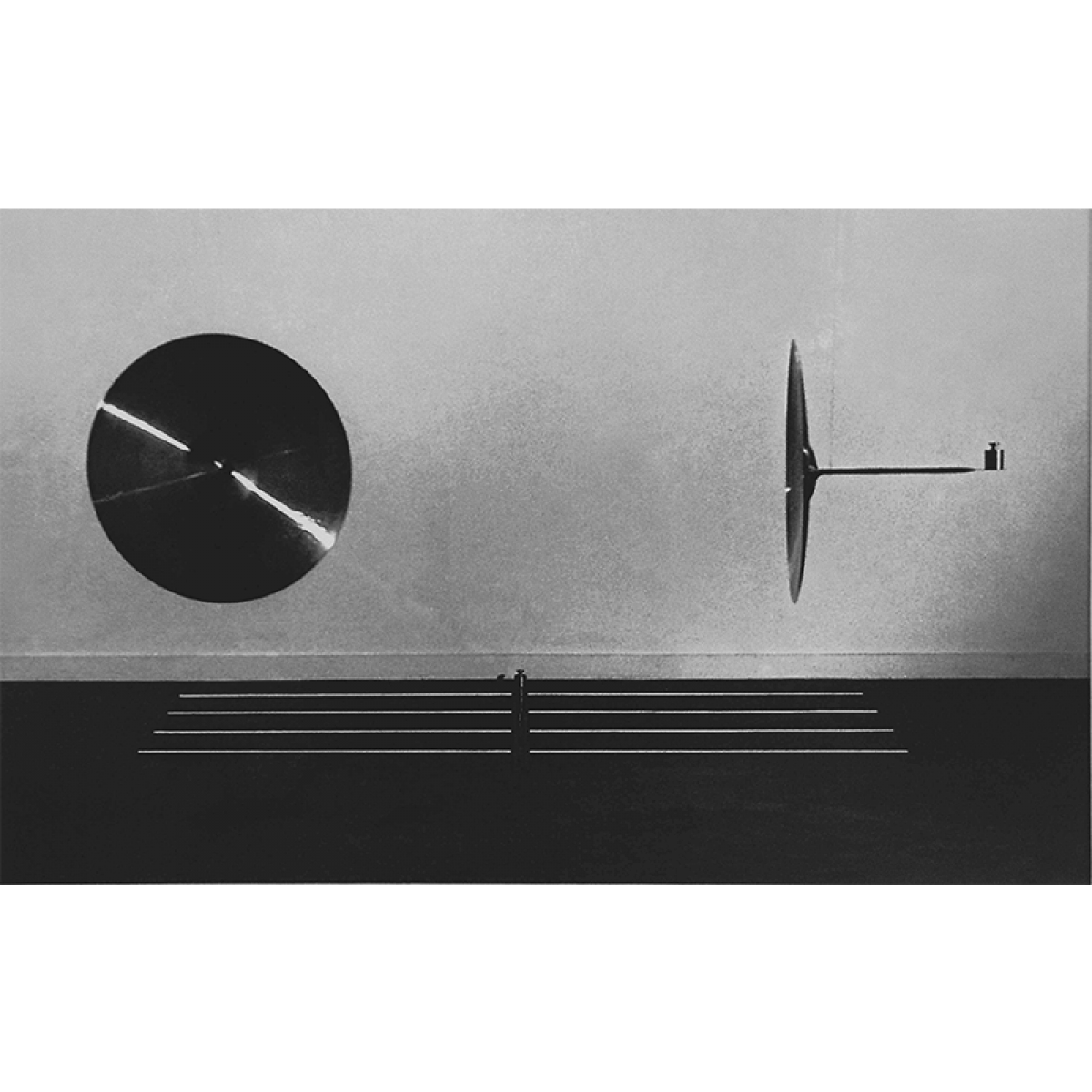 
The apparent simplicity and instantaneousness of the piece and the choice of its two protagonists is not the result of mere chance or fortune, but rather of a painstaking research process during which memories and references from past or present experiences were triggered to ensure the success of its composition. The final execution of this work was intertwined in its development with other pieces on which he was working simultaneously at the time. He himself stated as much in the introduction to monthly report no. 10: «In recent months I have been able to see the enormous importance of the development of these experiments, especially the physical construction of pieces, which although simple in their structure, aid me in enhancing my questions and in reaching solutions to the problems posed in the complementary theoretical phases».

Five drawings Baldeweg used as studies in preparation for The Column and the Weight have been preserved: in the first four it is possible to identify a complete column formed by a base, a shaft and a capital, as well as several weights of different sizes arranged on concentric lines drawn on the floor; while in the last drawing, which is already close to the final image, only the base and a section of the shaft can be seen together with several weights aligned with the axis of the column. The weights arranged along lines drawn on the floor appeared for the first time in the sound piece he titled Score [ills. 2-3], from 1973 as well, which also included some cymbals suspended from the ceiling as an analogy for the sound conducted by the floor, the walls and the vibration of the air. 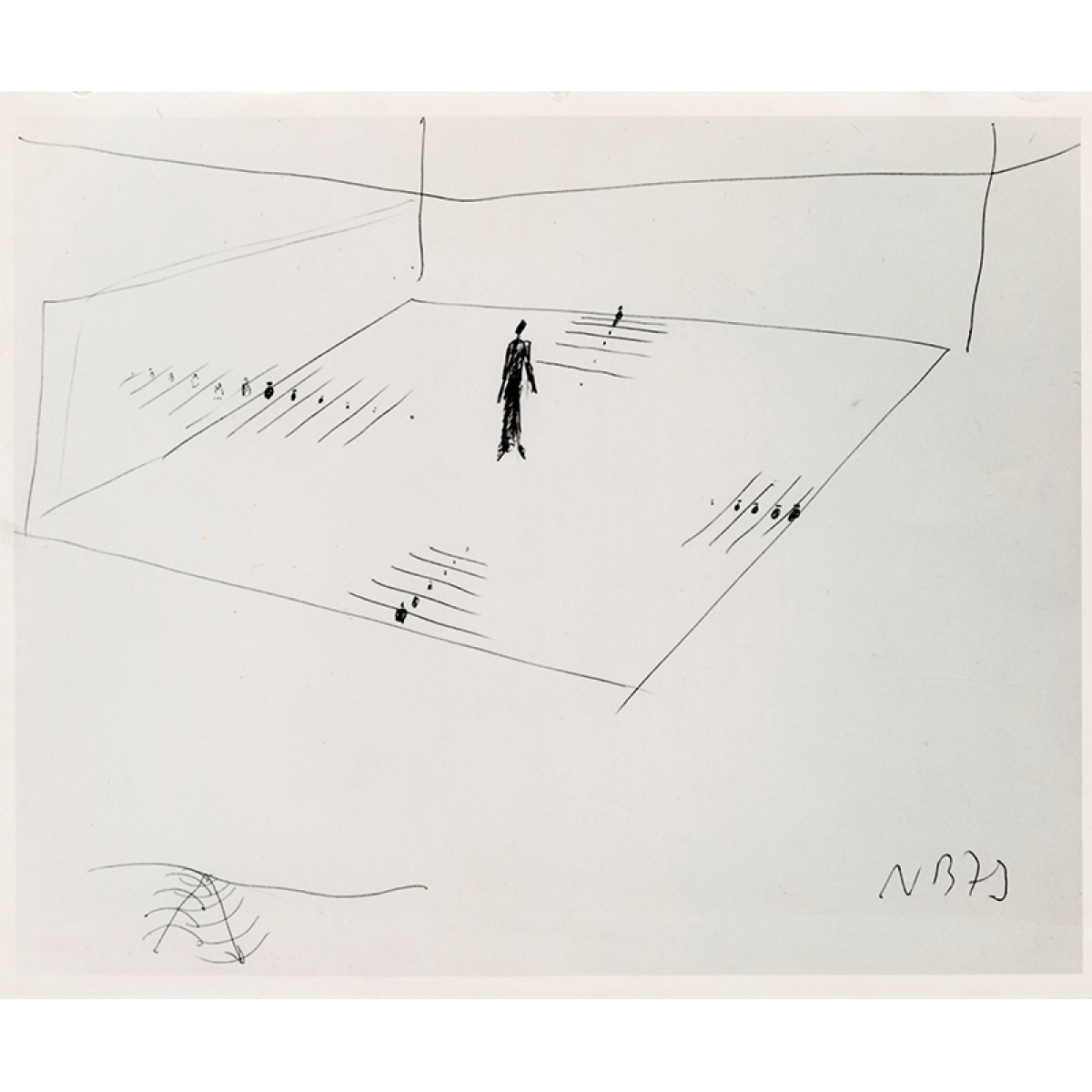 
The first study for The Column and the Weight [ill. 4] follows the description found in Broadbent’s text: the cymbals are drawn horizontally hanging by a thread; their sound associatively relates the contact of the column’s architrave with the Ionic capital; at the same time, the musical notes of the different weights are depicted on a score drawn as if it were extending out like a wave from the base at the point where it meets the ground. In the second study [ill. 5] the Ionic volutes appear as though they had been detached from the column and in their place two cymbals are hanging from the architrave. In the last study [ill. 6], the capital disappears from view, as the image is framed around a section of the column, and focuses on the shaft, base and various weights from a perspective very similar to the one that the piece will ultimately assume. 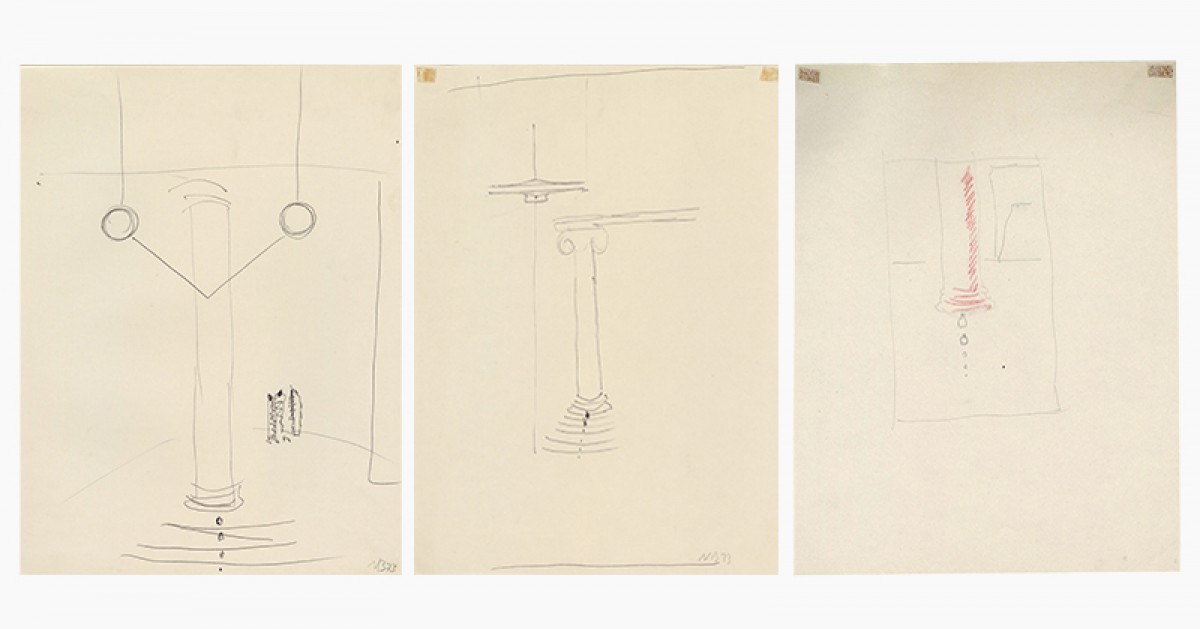