Dada was undoubtedly the most radical of the avant-garde movements, yet it is not possible to say much beyond that, since all the activities, manifestations and publications carried out by its members were contradictory and problematic. 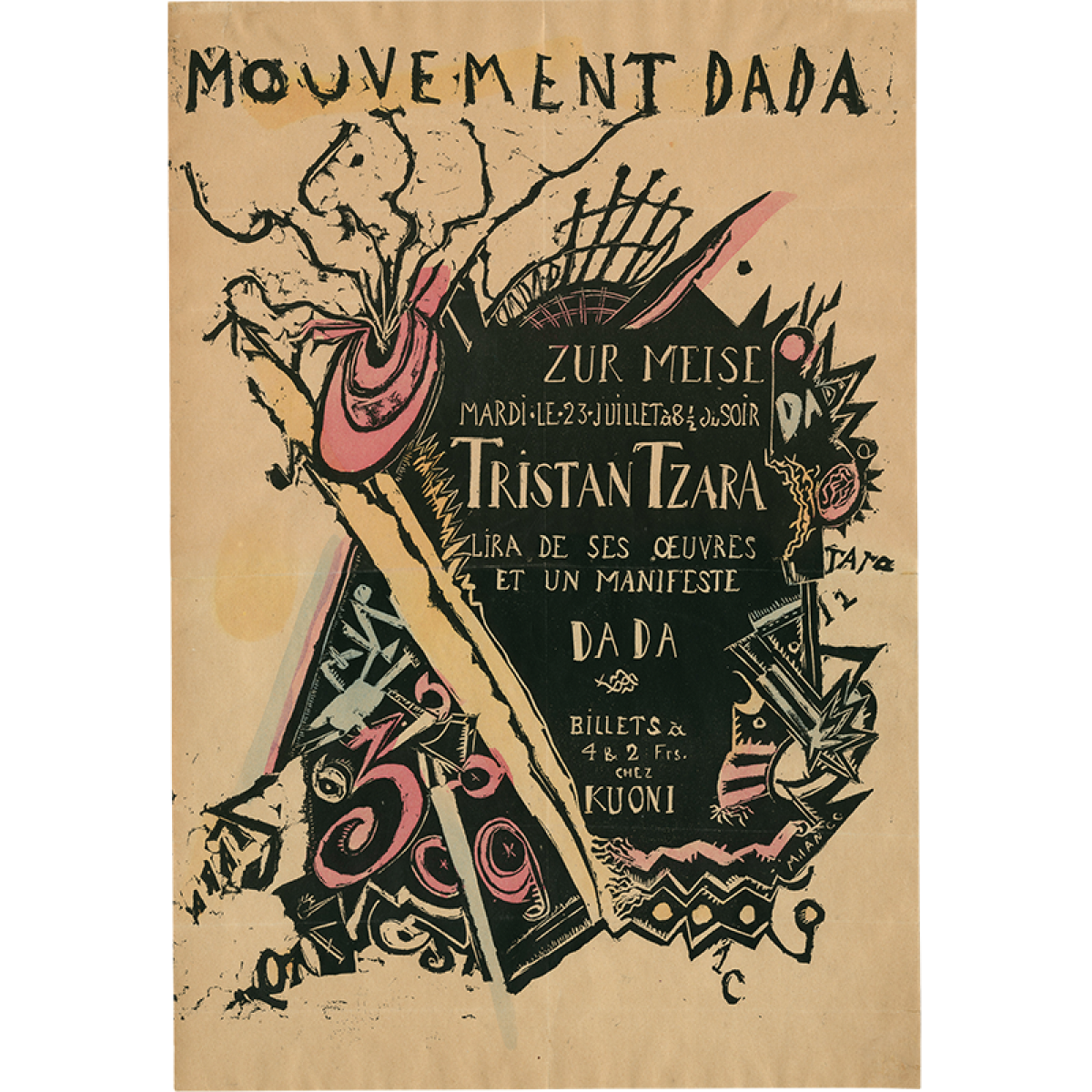 
Dada was undoubtedly the most radical of the avant-garde movements, yet it is not possible to say much beyond that, since all the activities, manifestations and publications carried out by its members were contradictory and problematic. The Dadaists themselves were aware of this and avoided any kind of programmatic definition by stating certain phrases, such as: «Dada is nothing» or «Dada means nothing» (1), and some of them (2) even declared themselves at certain times to be «anti-Dadaists», which was another way of being Dadaist. Richard Huelsenbeck, in the introduction to the Dada Almanach, begins by saying:

One has to be quite Dadaist to be able to adopt a Dadaist attitude towards Dadaism itself. (3)

The only possible way of knowing what Dada really was is to resort to the enumeration and description of each and every one of those actions and manifestations that history has qualified as such, bringing us, by extension, closer to a heterogeneous set of acts, positions and publications from which it is difficult to distill a common denominator that makes the quality of Dada unequivocally recognizable.

There are several reasons for this, which I will outline schematically. On the one hand, the absence of a single, clear leader, as Cubism had with Picasso, Futurism with Marinetti, or Surrealism with André Breton. Artists who, with their pieces, their manifestos or their theoretical texts, blazed a path that others accepted and followed, exhibiting together at shows and public events. This is not to say that in Dada there were no figures with the heart of a leader: Hugo Ball, Tristan Tzara, Johannes Baader (4), Francis Picabia and André Breton himself all possessed this quality and tried to exercise their authority in their own time and city, but they did not fully succeed in offering a unifying approach for all the Dadaists to rally around.

The avant-garde movements asserted their ideas and defined their positions through manifestos in which they set out a program with varying degrees of clarity. Dadaism also produced a good number of theoretical texts and explicit manifestos, such as the seven manifestos published by Tristan Tzara (5), but a program to be followed could not be distilled in these, nor did the other Dadaists conform to the ultimately self-serving ideas proposed by their author.

This leads us to a second problem—the diversity of the individuals who made up the Dada movement. Certainly, all movements have had to put up with the enormous egos of their various protagonists and have suffered the head-on clashes between their not always aligning respective interests, including the consequent conflicts pertaining to leadership and submission. However, in the case of Dada, there are some nuances that make these problems more pronounced. Firstly, the varying national, linguistic and professional backgrounds of its members made the group particularly heterogeneous. It was not a group of painters or poets who defended a particular interpretation of their respective discipline, proposing a new style or way of working. Instead, it was a constellation of activists who transgressed any particular discipline, going so far as to deny or disavow art, any form of art, thus giving rise to the idea (or the specter) of anti-art.

This state of affairs underscores the problem of Dada’s historicity. Being a style which cannot be recognized in terms of its formal features and which did not define its own specific technical resources, Dadaist "works" are not easily recognizable (because they lack common characteristics), and at times it is not even easy to accept them as works of art as such. Rather, it happened that each of the Dadaist artists had the freedom to use the forms, procedures, models and themes that might interest him or her at any given moment, resulting in a particularly eclectic ensemble not only of works, but also of intellectual interests that underpinned them.

Another way of approaching the study of Dada is by attempting to unravel the tangled web of personal relationships, based both on friendship and antipathy, that was woven between its adherents. Although each of the Dadaists was in contact with other members of one Dada group or another and actively participated in their activities, not all of them got to know each other personally. This was largely due to how spread out the groups were, located in cities as far apart as Zurich, New York, Berlin, Cologne, Hanover and Paris. Perhaps because of this, an infinite number of epistolary relationships were established.

Despite these difficulties in approaching the historical phenomenon, there existed what was termed a "Dada spirit”. However, like all immaterial entities, this spirit is elusive and, like an ectoplasm, it may or may not manifest itself in deeds and works. This Dada spirit can be summed up in a few concepts that I will take stock of in brief: provocation, scandal, irreverence, subversion and irrationality.

The terrible presence of war at the time of Dada’s founding weighed down its ideology with anti-war and anti-bourgeois manifestations, while the different national origins of the members who formed the first group in Zurich gave it an internationalist and heterogeneous character from the beginning.

From a philosophical point of view, Dadaism rejected the rationalism and functionalist logic on which Western thought is predicated, positioning itself against absolutism and advocating for abstraction and the decomposition of meaning, which led to valuing chance and unpredictability as the norm.

From an artistic point of view, there was a call for creative freedom and inventive spontaneity that materialized in an appeal to primitivism (6) and popular arts, the use of the absurd, the grotesque, irony and humor. Their actions took on a double meaning: against art, they proclaimed a new idea, that of "anti-art", and against bourgeois society, opposing any form of practical utility, common sense and the principle of rationality. The generalized state of mistrust into which they fell led to a nihilism that was more figurative than real, given that the Dadaists were tenaciously active and belligerent, going as far as political revolt.

From a formal point of view, they resorted to mixing genres and crossing the conventional boundaries between the arts. In addition, they made indiscriminate use of techniques devised and developed in other stylistic fields, such as Cubism, Expressionism, Futurism and Abstraction. Among the externally borrowed procedures they employed, we can highlight the dislocation of forms, simultanism and iconoclasm, all of which they transformed and applied to their poetic and visual language as well as to how they led their lives. Some discoveries of their own emerged from these practices, such as the phonetic poem, absurd language, some applications of collage, assemblages, certain random forms and a particular interest in movement and noise.

Two procedures in particular were championed by the Dadaists: simultanism and noise music. The first, simultanism, has its roots in the relativity of observation that Cubism had developed, featuring simultaneous and fragmented images taken from different points of view. This is a method which calls for a mobile subject, as opposed to the static contemplator, thus appreciating the Futurists’ interest in movement.

Noice music has its origins in Futurism too and manifests itself in the production of all kinds of noises, banging, shouting, laughing, sobbing, whistling and onomatopoeic sounds, which in turn call for an expressive typography through which words can explode in the space of the page.

Many Dadaists were poets and writers who expressed themselves through words, printed and declaimed, recited and sung in the now legendary evenings and performances, forerunners of the later happenings. For their part, the "plastic artists", more so than pictorial or sculptural works, produced collages, objects, illustrations, photographs, prints and publications. At the same time, they actively collaborated in actions and recitals, such as the soirées, where they declaimed, acted, danced, made music or noise, performing together and interchangeably with the poets.

All of the Dadaists, taken together, had a particular passion for editing magazines, pamphlets, manifestos and proclamations, which has made these graphic materials the most important and substantial part of their artistic legacy. Not only do we know about those performances, exhibitions and provocations from these documents, but the documents themselves, with their particular typography, composition, illustrations and layout, have become the genuine "works" of Dadaism.

4. Johannes Baader proclaimed himself «Oberdada» of the Berlin Dada Club.

6. Returning to the primitivism of African and Oceanic peoples was a way of going back to a past before the civilization that had brought about the senselessness of war.