Marcel Janco, one of the founders of Dada Zurich, distinguished two types of Dadaism: on the one hand, a negative one that got carried away by aggressiveness and nihilism, and that ended up descending into emptiness and superficiality, and, on the other, a positive one characterized by «automatism, the discovery of the game of chance, faith in the artistic instinct, the power of the subconscious». These imparted Dada with a new meaning: «a synonym of pure, childish, direct, original» (1).

Marcel Hermann Iancu (Bucharest, 1895 - Ein Hod (Israel), 1984) grew interested in art from early on, becoming a disciple of Iosif Iser, a painter and graphic artist and friend of André Derain. In high school he co-founded the magazines Chemarea and Simbolul (the latter with his friends Tristan Tzara and Ion Vinea) where Janco was in charge of the art section, to which he contributed drawings and graphic designs. After finishing school, he should have traveled to Paris to continue his studies, but the outbreak of World War I forced him to go to Switzerland, which remained on the sidelines in the conflict. In Zurich, he started studying chemistry, but the following year he decided to enroll in the architecture program at the Federal Polytechnic, where he stayed for four years until the situation in Europe meant that neither he nor his brothers, who were also in Zurich, could receive the family allowance that supported them. In order to make ends meet, they began to perform in cabarets and nightclubs, and thus wound up in a hall where Hugo Ball, Emmy Hennings, Richard Huelsenbeck and Hans Arp were preparing an exhibition for which they had requested contributions. Cabaret Voltaire was founded that night, and the rest is history.

Janco, a painter, sculptor and printer as well as an architect, designed posters, invitations and the covers of the first publications making up the the Dada Collection. Among these is a folder from 1917 containing eight engravings by Janco and a poem by Tzara which shows Janco’s more plastic side. This folder often goes unmentioned, but Tzara himself considers it part of the collection (2).

The folder is bound half in cloth with greenish cardboard covers and a blue fabric spine. The title, which is left-justified in the upper central area next to the spine, has an irregular, dancing typeface, designed by Janco, embossed in black ink and compressed into a square shape. Its interior houses Tzara’s poem circuit total par la lune et par la couleur and eight untitled xylographs by Janco. 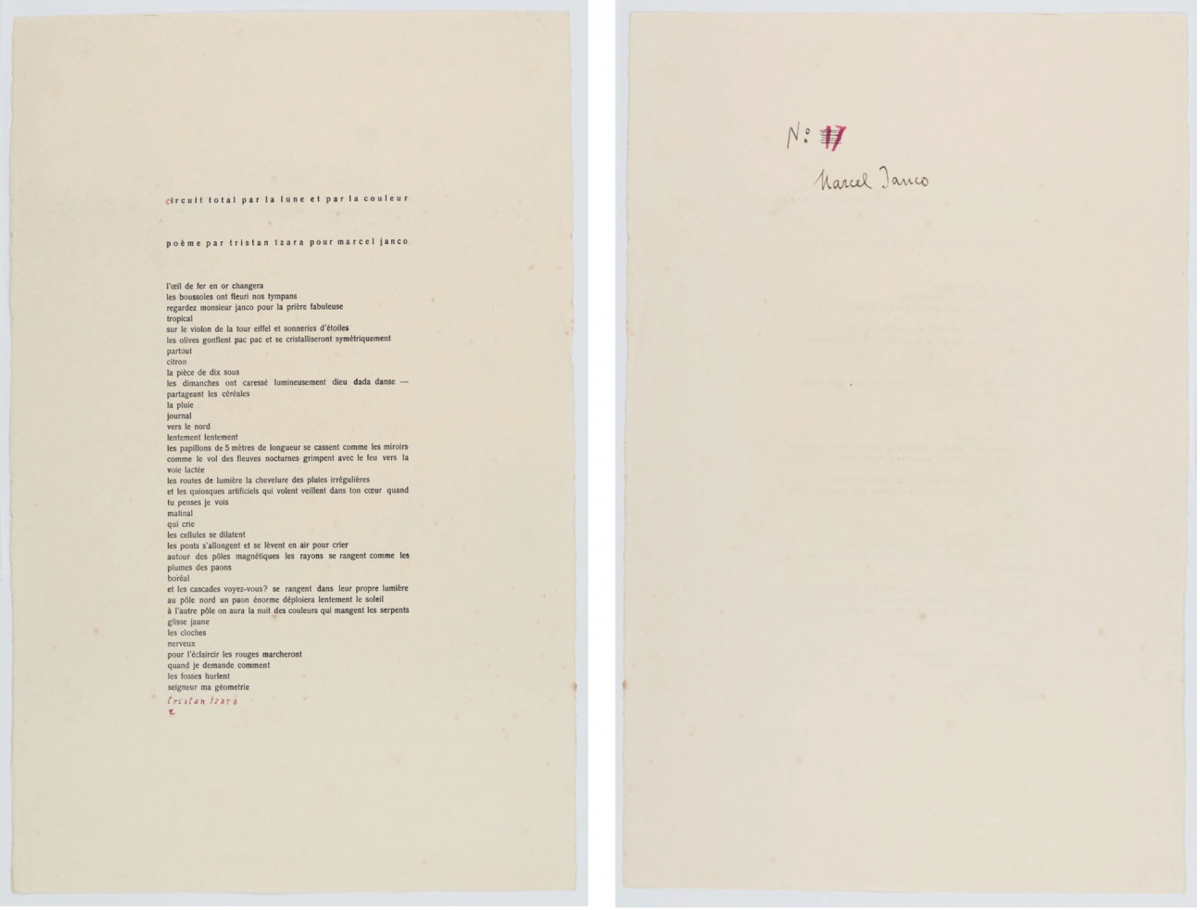 The poem is typewritten in black ink on laid paper. Breaking the uniformity of the black typeface are a simple red lowercase letter in the title and Tzara’s handwritten signature at the end of the poem, just above the drawing of a three-part flower that concludes the composition. On the reverse side of the sheet is Janco’s signature and a numeral, which in the case of this copy is no. 17 of an unspecified print run of 20, as indicated in Janco’s catalog notation. Nevertheless, today only two copies are known to exist: one in the Museum für Gestaltung Zürich and the other in Archivo Lafuente.

The poem is followed by eight engravings. Each one occupies the center of a sheet of Japan paper and was printed in black ink using a carved wooden plate with abstract forms resulting from strokes that are, in turns, strong and expressive, primitive and modern, and which hint at the influence of architecture on his work. Lines, angles, blank areas and areas saturated in black are rhythmically employed, sometimes directing the eye towards the central area either because the lines emerge from or converge in it, or because there is a void or a spiral that emerges. After that, there is only a simple and neat signature in the lower righthand corner, with the date in some cases. On most of them, enigmatic lines appear in pencil, framing some areas. 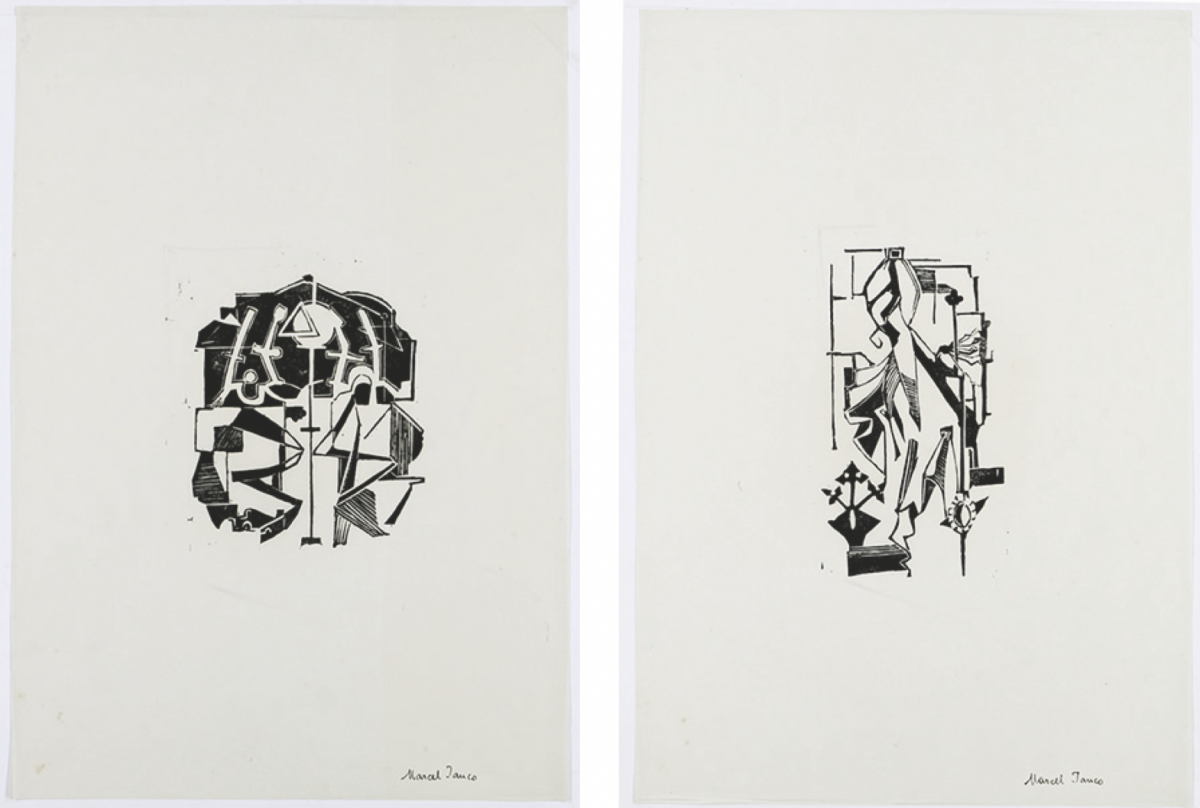 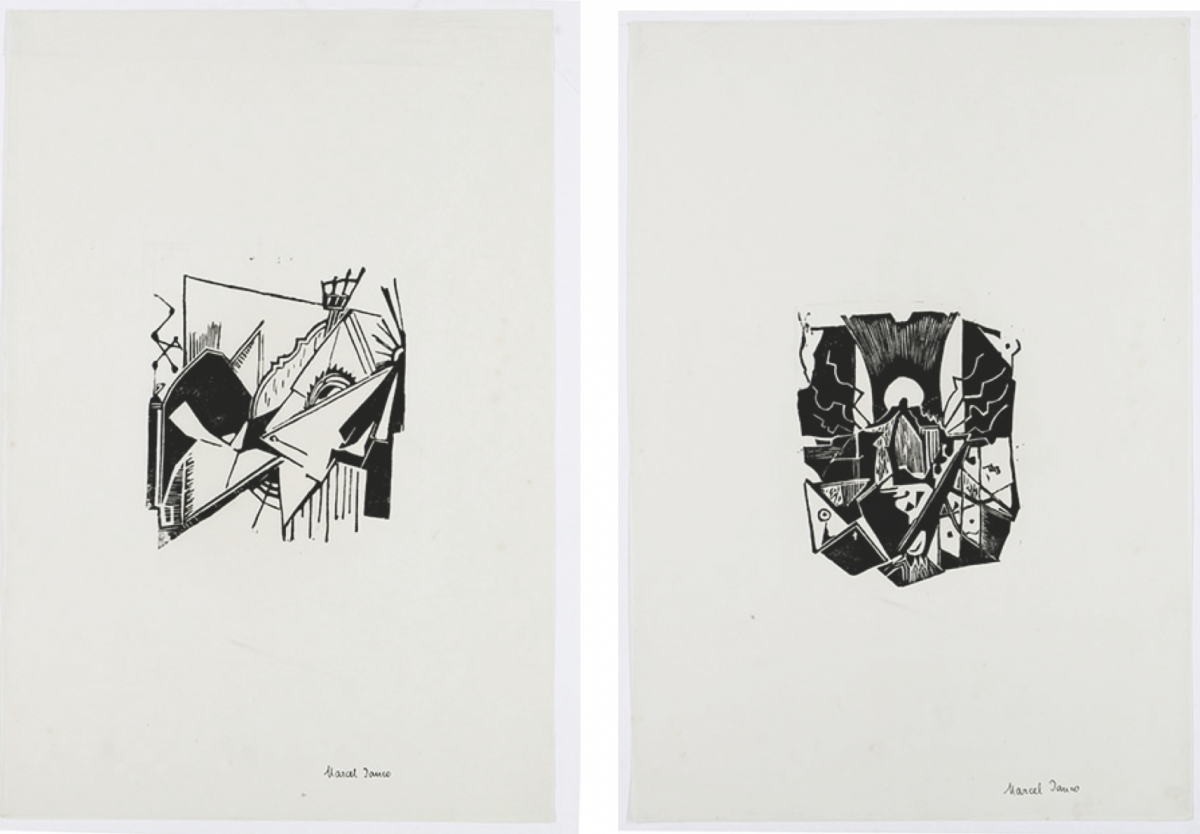 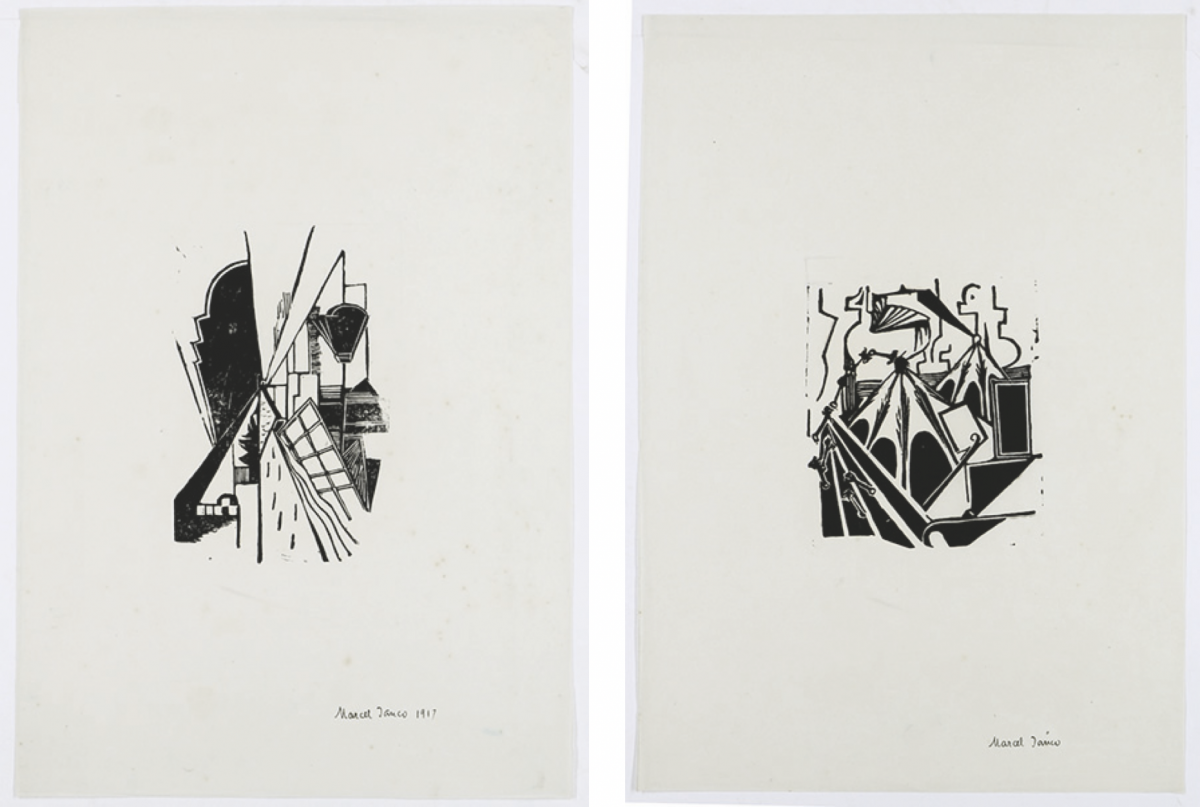 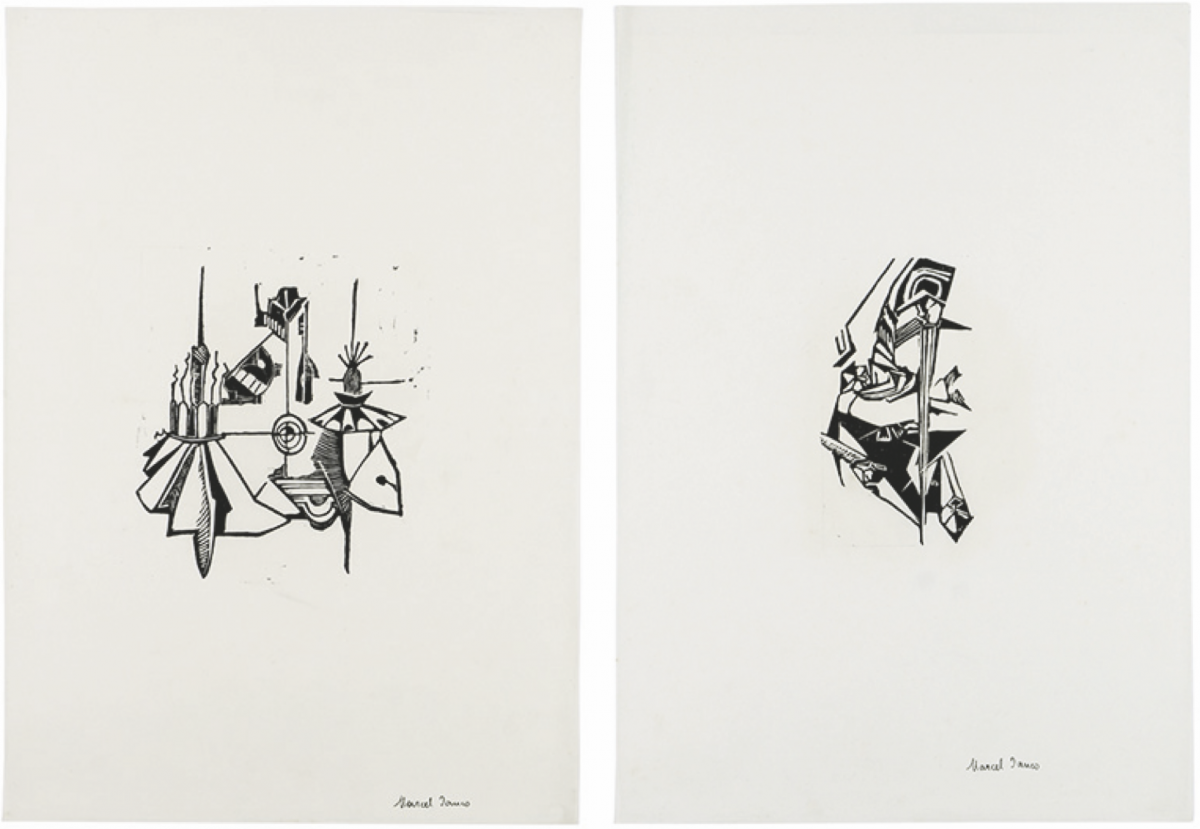 As stated in Dada à deux vitesses, 1917 was a breakthrough year for the positive Dadaists (Arp, Taeuber, Richter, Eggeling and Janco). The following year, their debates on abstract art already put to rest, they would recognize prehistoric art, children’s art, primitive art and popular art as the sources of inspiration for their work, which would lead them to the conclusion that a return to creativity was Dada’s most important finding (3).